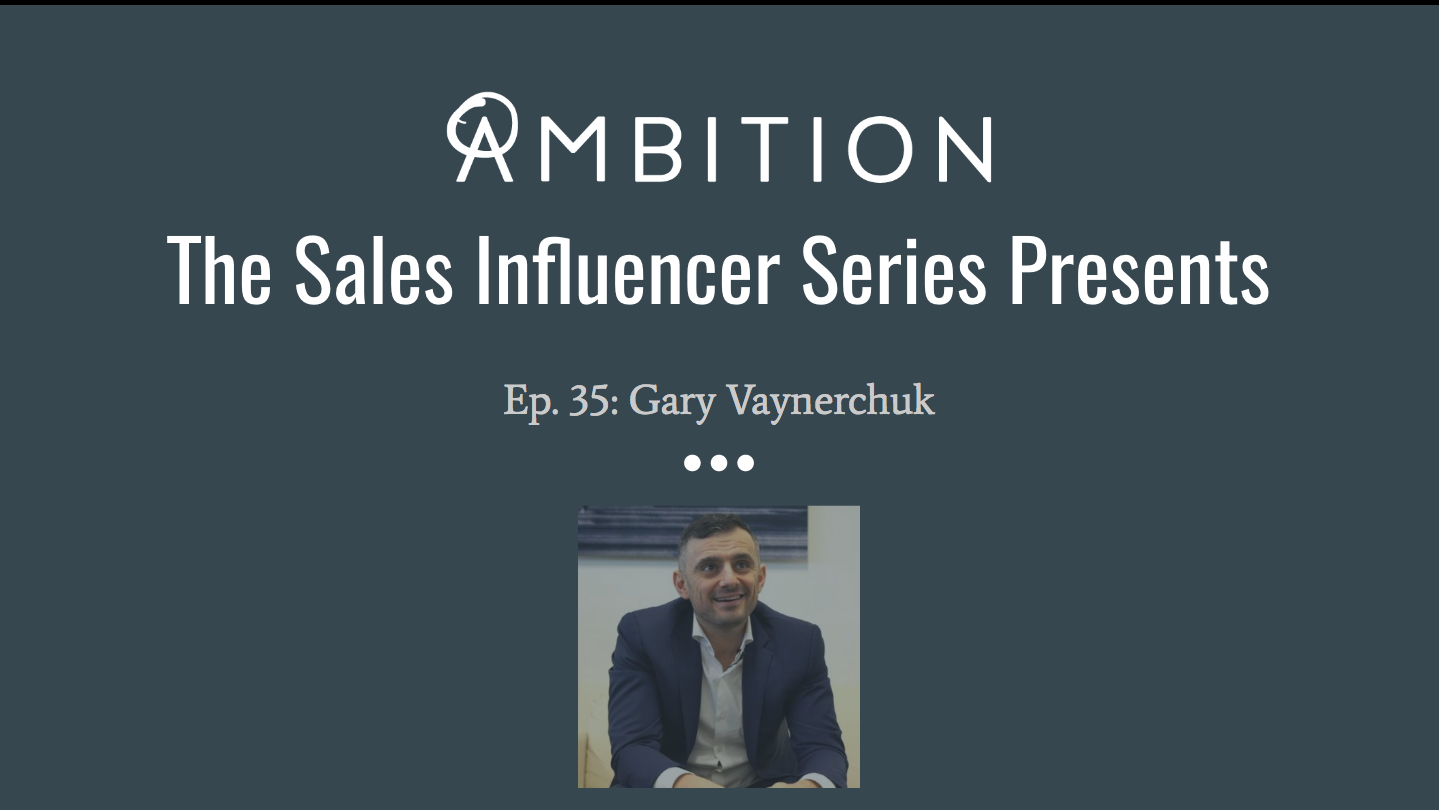 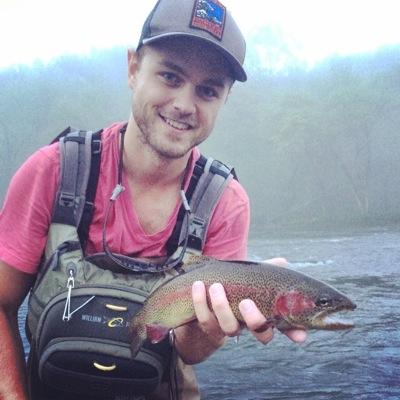 Welcome to Episode 35 of the Sales Influencer Series, a podcast featuring the brightest minds in B2B sales and marketing.

This month, we're privileged to host Gary Vaynerchuk, who spent an hour inside Ambition HQ recording our interview plus the keynote for our free online event - Aligned 2017 - debuting 50 video interviews and presentations on how to align B2B sales and marketing departments. (Register for free).

The topic of our interview with Gary? Understanding the millennial sales force.

Gary was born in the Soviet Union and emigrated to the United States in 1978. By the time he was 12, he was selling baseball cards with entrepreneurial fervor. From 1998 to 2005, he worked for his father's company, Shopper's Discount Liquors in New Jersey, helping grow the business into a $60 million venture by turning it into an online retailer, rebranding as Wine Library, and building organic demand generation on the backs of email, Google, Google Ad Words, and YouTube.

Gary used his newfound wealth and rising profile within the business world to begin investing in tech startups such as Twitter, Facebook, Uber and Venmo.  During that period, Gary also began publishing a number of books, four of which are New York Times best-sellers.

In 2009, he cofounded VaynerMedia with his brother, committing to building the company full-time in 2011. Since then, the company has become a very large full-service agency with $130M in revenue, 700+ employees and 4 offices in New York, Los Angeles, London and Chattanooga. Right now, Gary spends 95% of his time running VaynerMedia and 5% of the time being @GaryVee, the public persona people see on social media.

Is Gary as sharp as he was when it comes to buying and selling wine products as he was 6 years ago? No. Because he's not actively doing it. The reason he resonates with people is because he has the answers - which he's learned from hard-won experience.

To the subject of millennials in sales, Gary has always been a major of advocate of the millennial workforce, because he thinks the narrative around the millennial workforce is inaccurate and unfair. With that said, Gary also has a criticism for millennials: that is, they lack experience. They are impatient. They try to present themselves as experts, but they simply have not acquired the hands-on experience to earn the level of insight they aspire to.

Patience is mapping to your ambition. If your ambition is to live on $1,000 per year and live in Peru - you can cash in all your chips right now and move. If you aspire to something greater, you have to be patient and persevere for 5 ... 10 ... 15 years to get the reps you need to become the sales world's version of Michael Jordan.

You have to strike a balance in your sales organization between being purely results-driven and fostering a healthy culture that nurtures talent and engenders teamwork.

As a millennial in your sales organization, you should email your CEO and say, "Susan, I'd like to meet with you for 5 minutes." If Susan says 'No' and sends you to HR, that's not necessarily wrong, it just tells you how Susan sees the world. On the other hand, if the top earner on your team is a guy named Rick, who's rude, sexist and detrimental to overall team success, then that negates the raw numbers he has generated.

Sports is such a great analogy for business. You cannot remove life from the equation when evaluating a person's impact to your sales organization. Teamwork is essential. Look at the Philadelphia Eagles team from a few years back. Amazing team on paper. But the personalities matter - and they sunk that Eagles team. You need continuity towards your bottom line. A few cancerous people on your team - be it sports or sales - can undermine the most talented team in the world.

In an animated recorded exchange with fellow sales legend Grant Cardone, Gary Vaynerchuk took a hard stance against Cardone's 'sell until they bleed' sales philosophy. He doesn't dispute the philosophy's results - there are many, many sales strategies that work - but he takes issue with the craven attitude towards sales prospects.

Gary finds empathy to be the greatest pillar of sales. Hustling to hit the phones is great - but in this day and age, hustling to know your prospect inside and out is better. The same goes for knowing your employees - having a higher EQ towards your reports - generates macro-dividends. Gary is nice because it's practical and smart. You win because of what people say about you. And it's not schtick; it's who Gary is.

Alternatively, staying authentic to who you are is ultimately what's most important. If you're a prickly manager who prefers to speak directly, you have built-in advantages stemming from that aspect of your personality. For example, more likely to give better critical feedback than Gary, for whom that doesn't naturally. If you're authentically a gruff, direct person, then it's important to own who you are and be your genuine self when interacting with other people - you gain the respect of others by being authentic. People can see through a false persona.

When people razz on millennials, they are wrong. But millennials are also wrong if they expect anything. It doesn't matter what you accomplished in college. You're 22 years old and you're at zero. In sales, your pedigree does not matter.

This goes back to empathy. Understand why Sal, aged 47, who's seen the world of sales for 20+ years thinks you're a little naive. It took Gary 10 years in the trenches before he started sharing his thoughts on business. If you're a millennial in sales, stop telling everyone how to sell and go sell. Find the process that works for you. That's the beauty if sales. It's black and white. If you can sell like Don Draper and hit quota while sipping lattes at Coachella, you can do that.

Now shut your mouth, put your head down, and go crush it for the next 18 consecutive months.

This is the greatest Safety Draft of all-time. Two reasons: Number one, it is the deepest and best by everyone's point of view. The Jets went out and spent their first two picks on Safeties. There's a 0.1% chance that those two Safeties play out as the two best from this draft.

Number two: the NFL is an offense-driven league. During this great boom of offense, we've drafted 9 consecutive defensive players. The Jets are essentially the advertising companies Gary makes fun of. They're tripling down on television ad buys.

Number three: Gary loves Jamal Adams. He believes there's an 80% chance he'll be better than Malik Hooker. The problem: if Malik reaches his full potential, he's the next Ed Reed or Troy Polamalu. Gary would rather have Hooker, who has a shot at becoming the next once-in-a-generation safety, versus Jamal Adams and his lower ceiling.

Going against conventional wisdome, Gary supports the Bears drafting Mitch Trubisky with the 2nd pick. He has unknown upside, but if he hits, he's a franchise quarterback - the most prized talent in the NFL.

Worst case: the Bears still have Mike Glennon, a proven game manager who's demonstrably better than Mark Sanchez, Jay Cutler, Trent Dilfer and a host of otherr average-to-above-average quarterbacks who made conference championships via smart decision-making and an elite defense.

Gary's most exciting new venture? VaynerBeta, a brand-new division of VaynerMedia launching in response to the massive demand for VaynerMedia-quality marketing agency services priced for the SMB, High-Growth and Mid-Market company. Gary's goal is to position VaynerBeta as a small business's alternative to VaynerMedia, available to companies generating $4M+ in annual revenue, but not enough to pay the $25,000 monthly price point required to obtain their services.

The goal of VaynerBeta is to serve the vast market of hungry young companies looking to leverage the Vayner creative to help grow their company. Gary is excited about the variety of packages VaynerBeta will be offering and - in his final prediction for our podcast - predicts that VaynerBeta will absolutely crush it in Ambition's home industry: Software-as-a-Service.