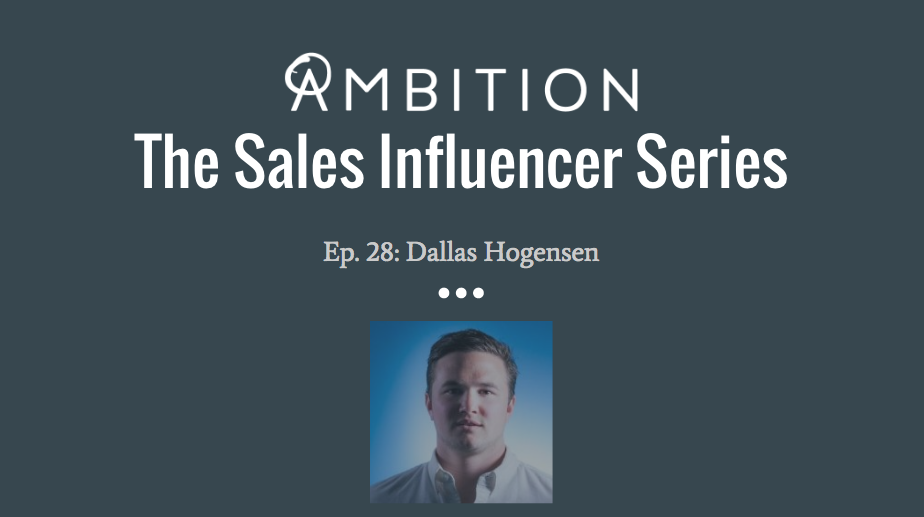 Welcome to Episode 28 of the Sales Influencer Series, a podcast featuring the brightest minds in B2B sales and marketing. In today's episode, we welcome rising star Dallas Hogensen, Head of Commercial Sales at Lyft and longtime Ambition user / evangelist.

Ever since he joined RocketLawyer's sales leadership team in August 2012, Dallas has spent the last 4 years building a well-earned reputation as a technology sales savant. In his first VP of Sales role, he rocketed iCracked to consecutive appearances on Forbes and Inc's Fastest Growing Company lists. Last fall, he joined Lyft to lead its nascent Commercial Sales Division.

For his interview, Dallas requested the opportunity to critique the current state of his sales leadership - in particular his tech industry peers - and challenge business leaders to think re-think the qualities that drive sales success.

Dallas started his career in finance and was pushed to transition into sales by a colleague who thought he would be a perfect fit. Dallas joined RocketLawyer and was immediately fascinated by the function of sales in the business environment. He would go into work at 5am every day so he could finish his work early and then spend the rest of his day connecting with successful sales leaders on LinkedIn and asking them questions about how they run their organizations.

That initial work to learn from top sales leaders helped Dallas quickly get a sense of how to most effectively scale a young sales organization in the tech industry. He took an opportunity with iCracked and experienced tremendous success in his first VP role. After that, he joined Lyft and now runs a 14 person inside sales team that comprises their commercial sales division.

When Dallas looks at the majority of his peers in sales management, they're missing the point. Rather than focusing on soft skills, human design, physical space, and emotional intelligence, they're focusing on things like activity metrics, analytics and the bloodless aspects of sales, rather than figuring out how to get in the mind of what people are thinking - which is what sales is. Sales is just the output - or result - of doing the fundamental things that are important to business.

In Dallas's experience, the people who have also taken this approach are the ones who have succeeded and continuously improve by leaps and bounds. They have a fleshed-out macro-view that then impacts the micro-view. They're focused on ecosystem. They're focused on teaching reps how to establish contextual relevancy. You see guys jumping from place to place and failing to get better - that's because they're failing to do these core components and their leadership has failed them.

And it's not their fault. It's a failure in design - we design employees to be hands and backs, not creatives. L. David Marquet, who wrote Turn this Ship Around, explains how to turn operational efficiency around by turning individual into thinkers, not order-takers, who practively do things and take initiatives.

A very overlooked aspect of sales leadership - that people aren't talking about - is design and physical space in the office. As human beings, we are products of our environment. You are going to be like the people you spend the most time with - and you spend the most time in your workplace. And most employees are like, "I hate this job." Work is a burdensome activity. So you want to create a positive environment and create a place that facilitates autonomy and community, rather than a short-term, transactional sense of place.

Dallas started doing that at iCracked. He took care to create, as he calls it, a "delight around every corner" so that the office was a pleasant place to be. He wanted the office to be inviting, open and ultimately a place where people wanted to be and that prevented process and comunication breakdowns. Dallas believes in the advantage of sales being quick communication feedback loops - it's much easier for a sales organization to evolve and improve than it is for a product to do so. Dallas references Spotify as a company that has a great physical space.

Dallas considers the technology sales field, right now, to be in a state of disrepair. It's an insular, navel-gazing echo chamber that's killing itself by only selling to other tech companies, creating horrible best practices, being obsessed with sales technology rather than establishing foundations for rep success and keeping the blinders on.

Dallas admonishes the loss of soft skills based on an obsession with quick-hit, quick-win strategies, account based sales approaches that only interact on a superficial level, and terrible cold emails that fail at every level. Math and outreach volume is important of course. But with that said, the technology sales industry at-large needs to get back to the basics and thinking about figuring out how to connect with an individual about something that matters to them.

Everything Dallas does from an outreach perspective was to understand, "why?"  Rather than ask for something or start a transactional, superficial dialogue, he looks to start a relationship. The vendors he's become close with are some of his closest friends now. And that's because he's working on something deeper than a transaction business. In contrast, he's on the receiving end of dumb template emails like this - sometimes from different people in the same day.

Dallas makes reps successful by giving them control. As a manager, his job is to be an editor - not a creator. You should be fostering reps' creativity, curiosity, and effectiveness. In contrast, most sales leaders say nowadays, "Here's the template. Don't deviate from it." Dallas doesn't do that - instead, he helps reps figure out how to ask the right questions in prospect interaction and figure out how to improve and demonstrate understanding of customer needs and context. Basically, you teach reps how to think customer-first. And that approach to sales leadership is also helpful to recruiting and retaining elite talent. Because no one wants to paint-by-numbers, they want to be creative and have autonomy over their performance.

That gets back to the number one thing Dallas values and thinks about as a sales leader: Coaching. Dallas played football in college and often relates back to the lessons he learned from the experience in thinking about how to lead his team. His emphasis is on watching game film, creating a sense of personal and team accountability, and turning yourself into a self-aware agent that can make the proper split-second decisions in the heat of the game. Dallas thinks that the main reason that the fundamentals of sales are broken go back to these few things: a lack of coaching, preparation, and proper mentality.

Dallas' go-to book on the subject is Bill Walsh's The Score Takes Care of Itself. You start by establishing a very clear picture of what excellence looks like. You set clear targets. Then you show reps what it feels like to be excellent and how success is achieved. At Lyft, Dallas has his team engage in weekly call reviews that involve the team. Onboarding at Lyft never really stops - the emphasis is on continuous growth with clear targets of what ongoing success looks like. We're stuck with a millennial sales force these days, and they're motivated by immediate feedback and a feeling of control over their path. People ask Dallas why people change jobs so much in San Francisco, and it's because they need these things from their managers and if they don't get them, they see nothing wrong with changing horses.

Lyft's Chief Business Officer David Baga is - in Dallas's words - a certified badass, someone who brings incredible intensity to his work and uses radical candor in his business relationships. Dallas also thinks that Kyle Porter, CEO of SalesLoft, is someone who is truly putting thought into doing personalized outreach at scale. He clearly cares about what he's doing and it reflects in his team and product.

Dallas also loves Mike Weinberg, one of the most refreshing voices in sales right now - simply because he calls out sales leaders for doing the wrong things and illustrates how to cut the b.s. and do things the right way. Finally, Dallas is a big fan of Ryan Williams, VP of Sales at LeadGenius, because he comes from a teaching background and places an emphasis on bringing out the best in people.

Dallas is most interactive on Twitter; follow him there @DallasHogensen. His LinkedIn InMail is full but you can just email him at dallas@lyft.com. His final thought for the day is the importance of thinking differently. Do something that's different. Break down the barriers you see in traditional business settings and figure out how to improve on them.