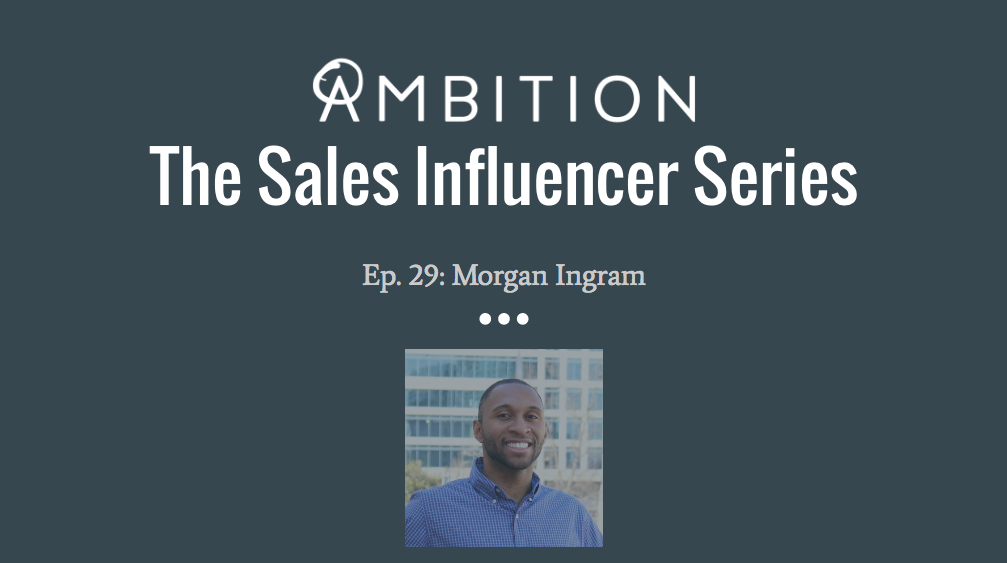 Welcome to Episode 29 of the Sales Influencer Series, a podcast featuring the brightest minds in B2B sales and marketing.

Morgan is a sales development representative at Terminus, where he helps B2B marketers put their message in front of the key stakeholders through Account-Based Marketing. Since entering the role in January 2016, Morgan has catapaulted to stardom on the back of a tremendous work ethic and his wildly successful SDR Chronicles YouTube channel.

For his interview, Morgan requested the opportunity to share his thoughts on succeeding in sales as a millennial - and why you have to become a student of the game in order to win.

Ep 29. How to Become a Sales Development Legend

Morgan attended the University of Georgia and spent his senior year building a company that ran video game tournaments at various colleges. Upon graduating, he became acquainted with the Atlanta tech scene and networked his way into an opportunity with Terminus.

Morgan's role is to call into new accounts, obtain interests, and schedule a demo for an account executive to close that business. Morgan tries to make that message as personalized as possible by using phone, email and social media to gain interest and provide value. Morgan gained the idea from Ralph Barsi, who suggested starting a YouTube Channel in his Sales Hacker article, Getting Out of Obscurity.  Morgan realized he had to be creative, be consistent, and keep creating content. He got buy-in and now has over 6,000 views on his videos in just 6 months.

Morgan advises becoming a student of the game, getting out of the kiddie pool, and putting yourself out there as a sales rep. He met with his sales development manager at Terminus after each call, win or lose, and received constructive criticism. Morgan sees a lot of millennials who aren't willing to take advice and who think they know everything.

People don't like to be called out or put on the spot. People also lack self-confidence and have been coddled their entire lives. Morgan was fortunate in that, growing up, he was always criticized. Morgan combats that by creating an open dialogue with his managers and ensuring that he retains what they're saying.

Morgan rigorously follows a daily schedule where he has blocks of time tailored towards reconnecting with prospects, cold calling, researching and so forth. He feels like people just willy-nilly go about the role, instead of creating a strategy and structure for themselves.

Everyday, Morgan has a morning check-in at 8:50 as well as 1:1s. He does 3-4 hours of calling throughout the day. He also has emails and general prospecting, which forms the 3 top things that he is doing. He also does tons of data gathering and intelligence on each prospect, such as seeing when someone goes on a trip.

He uses LinkedIn, Owler, and Ghostery, all free tools, to get insights on both the person and the company. With accounts that are A Tier or have really strong ICPs, Morgan does specialized, highly-personalized outreach. He also references the college they went to in order to create a human touch. Morgan's baseline for measuring the quality of his email messaging to ask: Would I respond to this?  The biggest qualification aspect of Morgan's job involving seeing if someone uses Salesforce.

Morgan recommends being aggressive in learning. As a rep, you're on the frontline. You need to understand marketing's message. You need to sit in on demos that account executives are doing. You should sit down with as many people as possible and figure out - "what are we trying to solve for here?" You don't want to be on a script. Because you're going to get questions and objections, so you need to learn enough to deftly handle those.

That means following people in the industry, reading things, learning from the best. Once you get the knowledge and reps that you need, you can get in the zone. You can understand everything - but if you don't know how to talk on the phone or write effectively. If you want to get into technology sales or startup sales, you don't need to be in San Francisco. Places like Atlanta, Austin, Salt Lake City and other cities are creating major opportunities.

You've heard of "Start with Why" by Simon Sinek? Morgan is more driven by the anti-why. As in, what if his whole life is a failure? What if 50 years from now, he dies without ever accomplishing what he set out to accomplish? He believe in doing - the second big driver for him is the understanding that there is never perfect timing for doing something. You must start the journey and make adjustments along the way. The third thing that energizes and drives Morgan is creating impacts. There are a lot of people out there who aren't doing anything; they're just waiting for something. Morgan has an edge to motivate people to move them forward. He believes in long-term value and creating positive impacts for people.

It has to start with Lucas Ulloque, Director of Sales Development at Terminus. Morgan had never had a quota-carrying role before - Lucas broke in him and helped him understand the cadences of sales and grow at a fast-rate. Lucas was very hands-on and whatever Morgan needed, he was there. Director of Sales Tonni Bennett also helped him a ton by showing him how to get through objections, showing what extra questions to ask to overcome objections. She also taught him how to talk more slowly and articulate the message more effectively.

From an outside perspective, Trish Bertuzzi has been amazing. She's given some great calls on how to carry yourself professionally and her Sales Development Playbook is amazing.

Find Morgan on LinkedIn and check out the SDR Chronicles on YouTube. Also check out Terminus - they can help you align your sales and marketing operations quickly and easily.