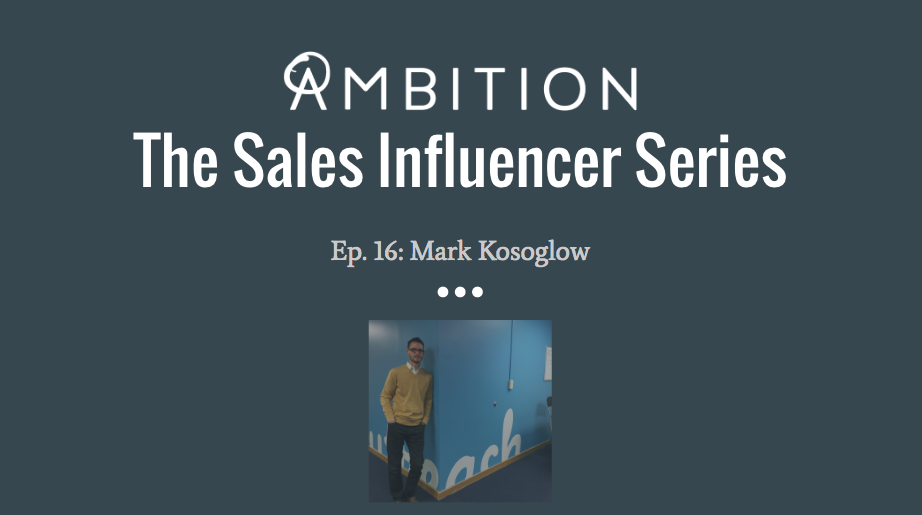 Welcome to Episode 16 of the Sales Influencer Series, where we interview leaders on the cutting edge of sales and marketing. In today's episode, Ambition Director of Marketing Jeremy Boudinet interviews Outreach VP of Sales Mark Kosoglow.

Outreach is an all-in-one communication tool for sales teams. It's exploding in popularity thanks to the efforts of Mr. Kosoglow, who has gone from first hire to VP of Sales over a 30+ member team.

The AA-ISP Top Sales Influencer joins us today to give us the fully transparent, bullshit-free backstory of how he's scaled Outreach so rapidly. Listen to his full interview below.

Synopsis: Mark credits his mentors with showing him how to become a success at sales.

He came from a non-SaaS background, as a highly successful sales leader who sold textbooks.

On a gut feeling, Mark reached out to Outreach Co-Founder Manny Medina when the company was just the Co-Founders and offered to come work for 100% commission.

He joined the company, brought on 2 members of his previous team in similar, commission-based roles and began selling Outreach.

Synopsis: Outreach was founded in early 2013. Kosoglow came on shortly thereafter on a commission basis and by November 2014, was the company's first full-time sales hire and its appointed VP of Sales.

Kosoglow learned a lot from Jacco vanderKooij, who invited him to an event when no one knew who Mark or Outreach were.

Jacco gave him a 700 page manual and a bunch of organizational graphs.

Mark is a very operationally-minded sales leader who thinks in stages. He used Jacco's materials to figure out the perfect structure for a modern pod-structured sales organization that sells strongly.

A pod is a little tribe within your company that consists of several people in different roles who work together on the same accounts. Sales development reps, account executives and customer success reps.

The pod creates a sense of unity and team, helps with customer success since SDRs and AEs feel ownership over client success as well.

Synopsis: Mark doesn't want to bring down ABS or disparage people like Lars Nilsson, who Mark credits with creating the tech stack that makes it possible.

But to Mark, Account-Based Sales is just sales. Going after 6 people in an account is Sales 101.

In Mark's mind, people got spoiled by inbound leads. Reps got distracted by a hot inbound lead. But at the end of the day, an inbound lead often leads to a wild goose chase.

If you want to take down Google, you might have 1 inbound lead that's hot and ready to talk.

But you're going to need to attack, like, 17 other people in order to bring that account down.

Synopsis: At Outreach, each rep will only have 300-400 accounts at a given time. Outreach works off zero inbound. They use old school hustle to go out and bring accounts down.

The idea is scarcity. When you have a limited number of people you can reach out to, you treat them special. It puts a healthy DNA in the outreach process.

We have a really tight way we prospect account. BDRs aren't allowed to create account. They can only work what off accounts Mark has reviewed and validated.

The AE closes the account and the SE guides the pilot. There are 2 paths in a pilot. 1 path is the user adoption path, which is 100 percent the resposibility of the SE.

The AE manages the other path, which is the procurement path, which involves bringing in other stakeholders, creating internal marketing documents to close the big accounts.

The SE quarterbacks user adoption to feed the AE awesome stats, which is how Outreach is able to charge what we charge. (Outreach costs 2x what its competitors cost). The AE then quarterbacks the deal on the business side.

On the backend, Outreach has Customer Success Executives who make sure onboarding goes smoothly, figures out user issues and ensure there's a plan for long-term success.

And when that happens, people get really good at it. Outreach SDRs do 3x the work of normal SDRs. Outreach AEs handle 2x the pipeline of normal AEs.

And they work together closely with the SEs to drive revenue. Outreach's VP of Success Michael Santiago works really closely with Mark to make sure they are driving adoption.

From there, it's just a matter of hiring another pod. 2 SDRs, AEs and SEs.

The philosophy of Mark's sales team is: Find out what the problem is, find out if you can help them, don't be desperate and feel free to send a prospect to a competitor if it's not a fit.

Synopsis: The overarching philosophy Mark uses is transparency. Outreach has a completely open culture that encourages people to discuss where they're struggling.

No one at Outreach cares about admitting that they suck. That encourages people to go big, take risks and try new things. Even if you screw up, you're still moving forward.

If an SDR discovers during the prospecting process that an account is unqualified, they update the account status and indicate that an account needs more research to determine future qualification.

Outreach's sales operations leaders go back and reassess those accounts for qualification later.

The last part is the phone calls and emails reps send out to identify:

Mark manages rep performance using Ambition. Everyone's performance is on two massive screens in the office. Mark doesn't do that to call people out, he does that to help provide support.

If a rep is hustling and hitting their productivity numbers, but not getting results, it's Mark's job to figure out how to make them successful. It's the sales leader's job to make sure that activity leads to results.

With that mindset, people relax and don't work out of fear, but out of passion. Moreover, they develop camarederie and go out of their way to help each other as a team.

Synopsis: The first thing Mark did was screw up. He's made many mistakes. Early on in his sales management career, he accidentally sent an email complaining about a rep to his boss.

When the rep confronted him, they both opened up about where the other was struggling. And it forced Mark to go back to school.

He read Coaching Salespeople into Sales Champions by Keith Rosen. And he remembered: It's my job as a sales professional to sell people on becoming better reps within his system.

So he changed his approach. Instead of telling them that they're struggling and proscribing solutions, Mark sits down with them and talks to them.

Do they know they're struggling? Of course they do. Mark asks them how they think they can turn around their performance, helps them create a plan and makes sure they execute.

Synopsis: According to Mark, Outreach built the company on their own tool. That's huge for believability, when your sales reps live in their own tool 90% of the day.

Communication is how you solve problems - conversations like the one taking place right now.

Ultimately, you don't want more meetings. Not having enough meetings is a symptom, not a disease. If you want to cure the disease, which is bad communication, then buy Outreach.

Look for a tool that attacks the disease, not just the symptom. Mark cites Ambition as an example. Although it gets labeled as gamification, Ambition actually solves the diseases of non-transparency and bad culture.

For Mark's team, Ambition gets rid of the Black Box around performance. People can't hide. And they can all work together to get to the top.

Gamification is like ABS: Just some stupid buzzword. Really, it's about taking data and making it actionable.

Outreach has had Ambition for 6 months and people get more pumped about their Anthems now than they did when they started. The more data Outreach throws at Ambition, the more valuable Ambition gets.

If you're interested in Outreach, check out Mark on LinkedIn and he'll get you hooked up with a member of the Outreach team to discuss adopting their product. 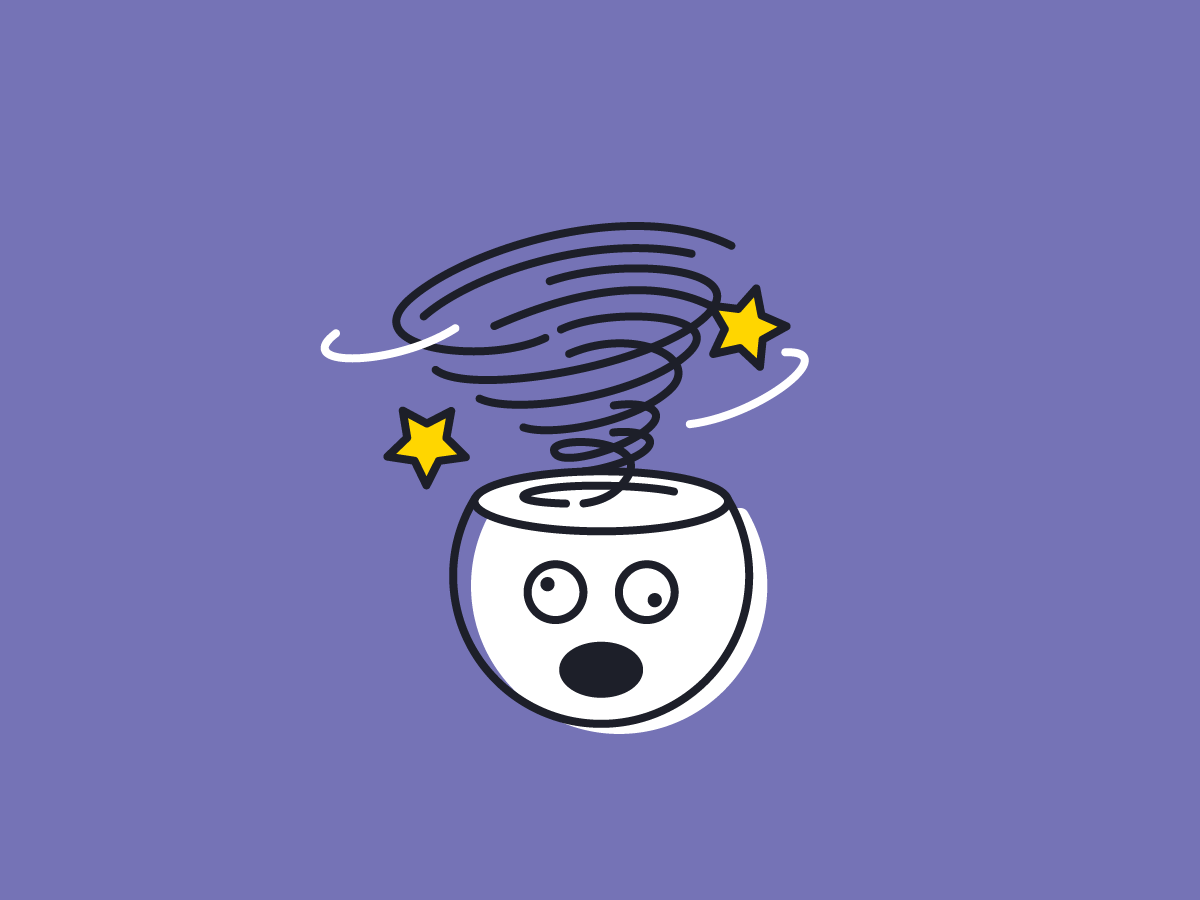 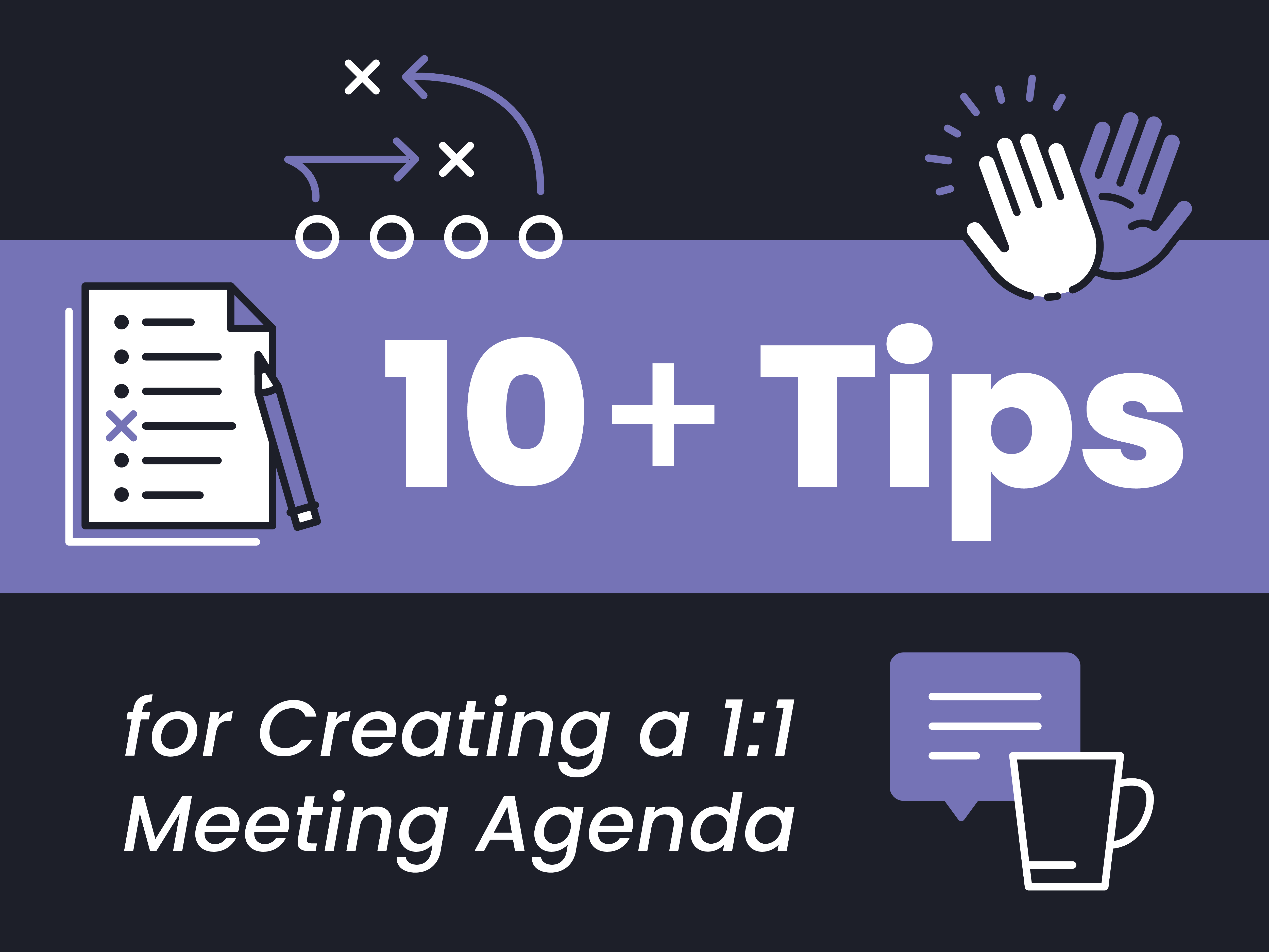 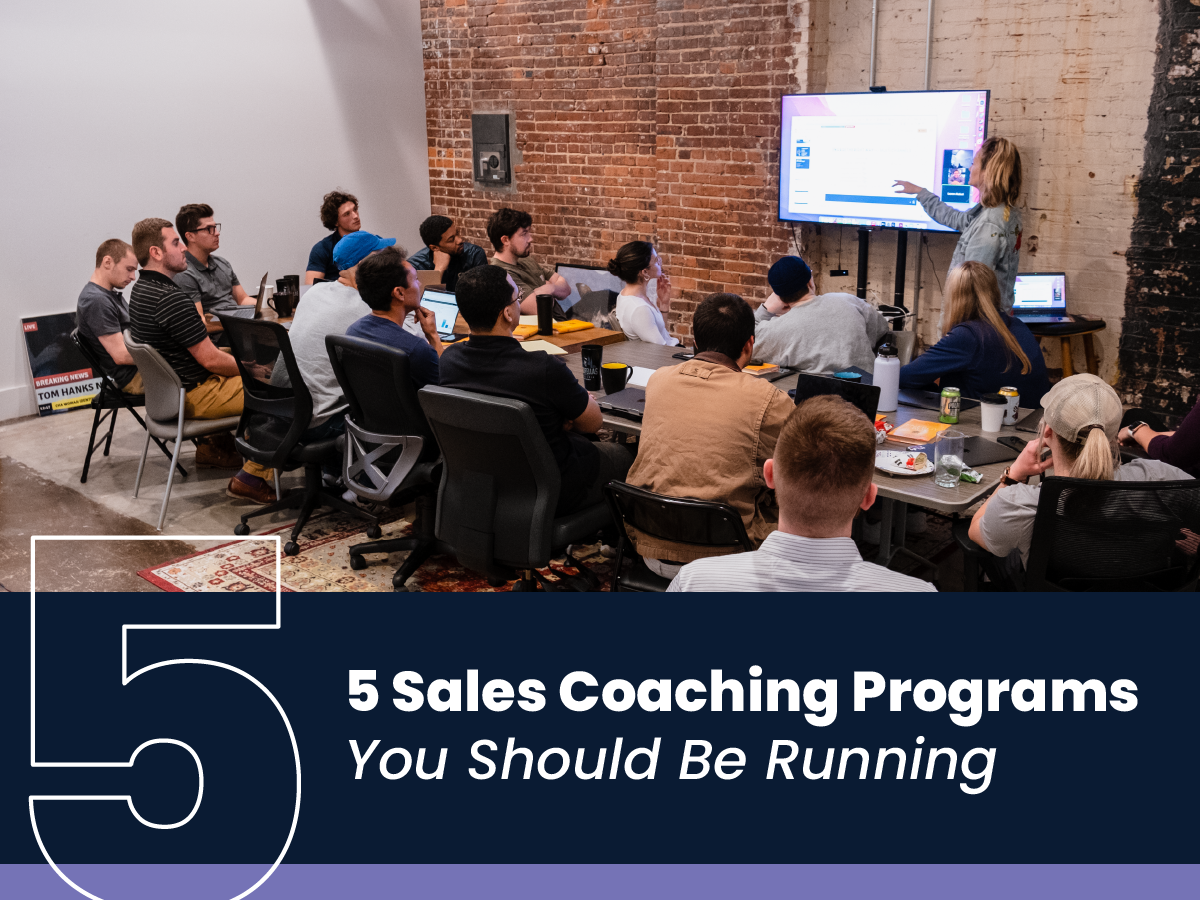