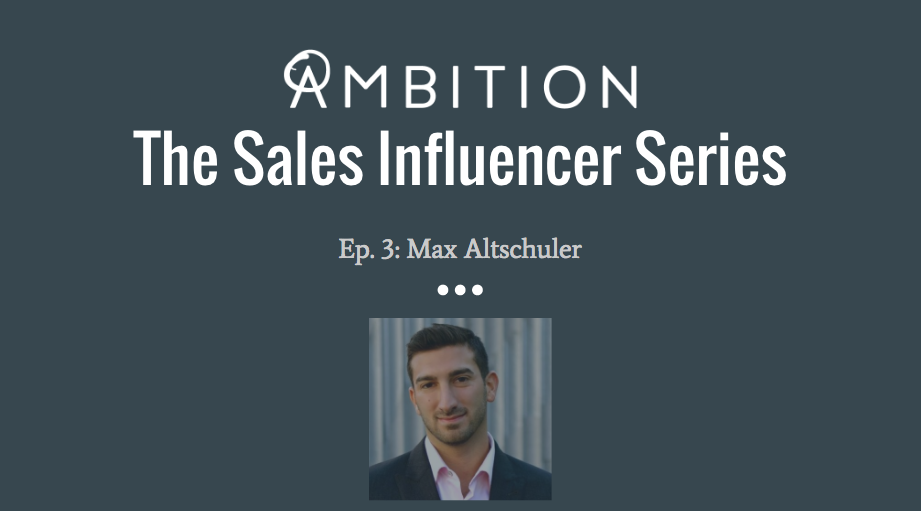 This interview is chock full of truly unique insights (the origins of modern-day Sales Hacking), bold predictions (2015 will be the "Year of the SDR") and scouting reports of cutting-edge products.  If you're looking to streamline your sales process, you've come to the right place. So let's get right to it.

We're thrilled to welcome Max to the Ambition Blog today. Today we'll be talking all things Sales Hacking. If you are a Sales Professional who has not yet visited SalesHacker.com, don't walk into the office tomorrow without a subscription to their content.

Before we begin, I highly recommend attending a Sales Hacker Series event and Sales Hacker Conference sometime during 2015. Every SalesHacker production, whether it's content, a conference, or an event, brings amazing value.  I've experienced this firsthand, and I hope you do likewise.

Part I. The Definition of Sales Hacking

JH: Max, let's start with a post you wrote, the Ultimate Sales Automation Tool Guide, that provides so much value to startups. When we started Ambition, we had no idea what any of those tools even were. Give us the big picture: The concept of Sales Hacking and why it's become such a vital part of modern-day sales.

On a general level, sales hacking is using technology, psychology, human capital, funding, legal -- you name it -- to overcome some barrier in your sales process. In the beginning, we focused heavily on the technological and human capital side of things at the SDR.

For extremely cheap, you could build massive leads lists, segment them, and send targeted emails using all sorts of copy testing without really touching the system. That was when we first really started sales hacking. Now there are more and more companies productizing these processes.

The psychological side is my favorite - everything from in person body language to messaging and tone. Like for example, when you’re in a meeting and someone is lounging back in their chair with their hands folded behind their head and one leg crossed over the other.  That’s called “catapulting” and it’s a position in which they think they have power.

There’s also the position where they’re arms are crossed. This position means they have their guard up. In both scenarios, you want to get them to lean in and listen, right? Well what do you do? Just hand them a pen and paper or slide around to their side of the table and have them look at your computer.

On the messaging side, there are a lot of things you can do via email that are higher performing than others. Like John Barrows' "Why You? Why You Now?" and the AIDA copywriting guides. Sometimes I find that one word can make all the difference. I had a partner once that I wanted to take on more responsibility. The word responsibility can be a bit daunting but if you change the word to control, now it sounds a lot better for the other person. Even though you mean the exact same thing.

And those are just a few examples, there are a lot more out there. Just try new things and test the limits at different stages of the Sales Funnel and you’ll find all new ways to accelerate or automate sales. Check out my article on 5 Sales Hacks Every Salesperson Should Know.

Part II. The Birth of a Sales Hacker

JH: Tell us a little more about how you got started down the path to Sales Hacker.

I really got started at a company called Udemy, an online education marketplace that's actually become the largest one in the world. The company is now all over the globe and sells materials in ten different languages, if I'm not mistaken. It's done really well.

So I was actually Udemy's first sales hire, and was tasked with building out the Instructor side of the marketplace. It was a very heavyweight sell -- I basically had to convince some of the world's leading experts to sit down and record themselves teaching a course for no guaranteed payments.

It was pretty audacious, looking back. We essentially had to convince these brilliant people to forego working with a publisher, writing a book, doing speaking engagements, and so forth, and work with us.

How we succeeded was by selling prospective Instructors on the fact that they could potentially reach millions of people around the world -- anyone from a rural a village in Uganda to somebody in a High Rise in New York City. We did a good job of getting the initial Instructors, which naturally enabled us to get more and more students onto the platform. And long story short, we ended up reaching a point where we had an insanely high demand for Instructors. We ended up reaching a point where lead generation on the Instructor front became a serious issue. Which is where the idea of using technology to hack lead sourcing came to fruition.

JH: I'd love to hear about the origins of Sales Hacker. You guys have an amazing blog, host these great conferences across the country and really became a go-to source for Sales Thought Leadership almost overnight.

SalesHacker really began in January 2013, when we started doing these monthly meetups in San Francisco with a couple of guys I knew who were doing interesting things in sales. We were really fortunate, in the sense that the crew at these initial meetings consisted of all these up-and-coming company leaders who were just starting to take off.

For example, ToutApp was just starting to emerge around that time, and we had T.K. Kader in the bunch. We had Zander Ford, who was the head of Sales at BlueKai. We had Ryan Buckley, who was the COO of Scripted and wrote the first true Sales Hacking article, which was about scraping Crunchbase.

We had Dan Murphy from Import.io. Ilya Lichtenstein, the CEO of Mixrank and a true Mad Scientist of Sales Hacking -- he was there, too. Anyways, we all got together once a month and would share what we were working on, talk about sales highs and lows, and basically just act as a Sales support group.

Eventually, we started diving deep into things like: How are we scraping Crunchbase? How are we hacking using Rapportive? How are we doing multi-variable testing using ToutApp? Which of course led to benefits for everybody.

And over the next few months, the group just kept growing. We had an internal rule: Only bring in people who add value in the form of new ways to hack sales. We ended up having lots of new people come in and help create all these new technologies and strategies we were trying.

The funny thing is: All this was happening before a lot of the most prominent sales hacking tools people use today even existed. SalesLoft didn't exist. Toofr was a tool Ryan was building with our guidance but was basic in functionality.  Much of the sales automation and acceleration you see today didn’t really exist even just 2 short years ago. It's just crazy how far the technology has come in such a short amount of time.

JH: There are so many great new products out there, many of which are still under-the-radar. You have companies like Kimono, who went through our Y Combinator batch, and their product is awesome for scraping data and sourcing leads.

Absolutely. I actually use them myself, along with Import.io. And Outreach.io is a new product that's really interesting, and that I think is tailored to the SDR. Speaking of which, I think 2015 is going to be the year of the SDR. People are going to be putting more resources behind SDR's than ever before. And so, anything that helps the SDR right now is something that I'm really behind.

So Kimono, Import.io, Outreach.io, SalesLoft -- those are all really valuable, cutting edge products right now. And they're perfect for this rising tide we're seeing across the industry, which is the growth of SDR dedicated specifically to the very top of the sales funnel. The number of Sales teams using these advanced tools to source qualified leads and get sales cycles on the right track is skyrocketing right now.

JH: You're a big fan of Toofr, a product that I actually listed on our blog as one of the Six Tools a Sales Team should be using and is a great way to get leads. Any other cutting-edge products like that worth checking out?

Yeah, so Ryan built Toofr with some guidance from the group. I helped him clean it up and start selling it. It’s pretty solid. Ryan is also the COO of Scripted, but finds time to work on his hobbies, which includes Toofr. It was built to solve a need we all had which was finding and validating emails at scale.

But as far as sourcing new prospects goes, there's also a new product out called Discover.ly that's worth checking out. I also love the simplicity of Rapportive, whereas Discover.ly offers more in the way of reliability. Both are worth checking out. A few other sales tools I’m pumped about are Datanyze, Conspire, and Socedo. There are tons of great new products out there, it's just a matter of going out and finding them. 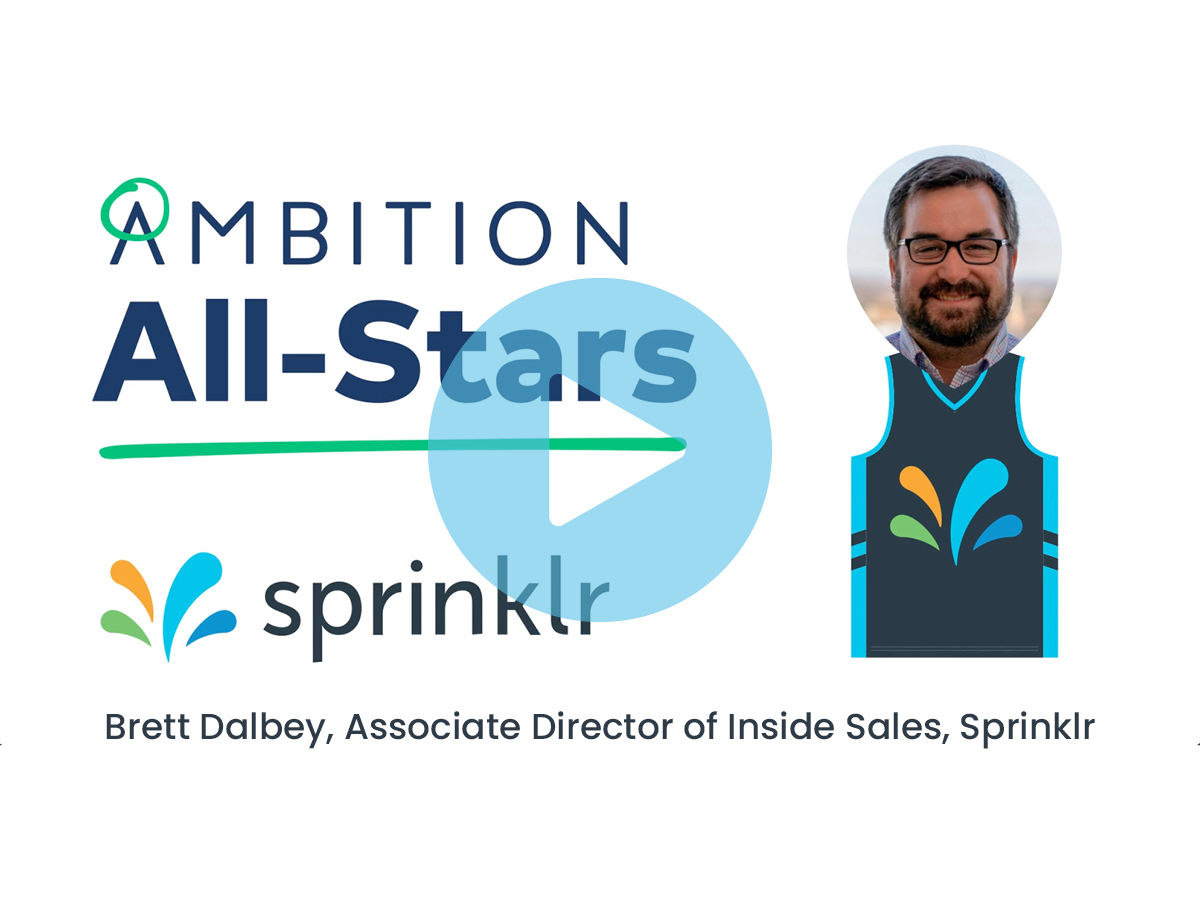 Prior to adopting Ambition in 2020, Sprinklr’s Brett Dalbey couldn’t see what was or wasn’t working in his team’s performance data because it was difficult or, at best, time consuming to obtain. Now, with standardized reporting in Ambition, he can follow the underlying thread in the numbers and easily see where his team is missing the mark to coach and course-correct in real-time.