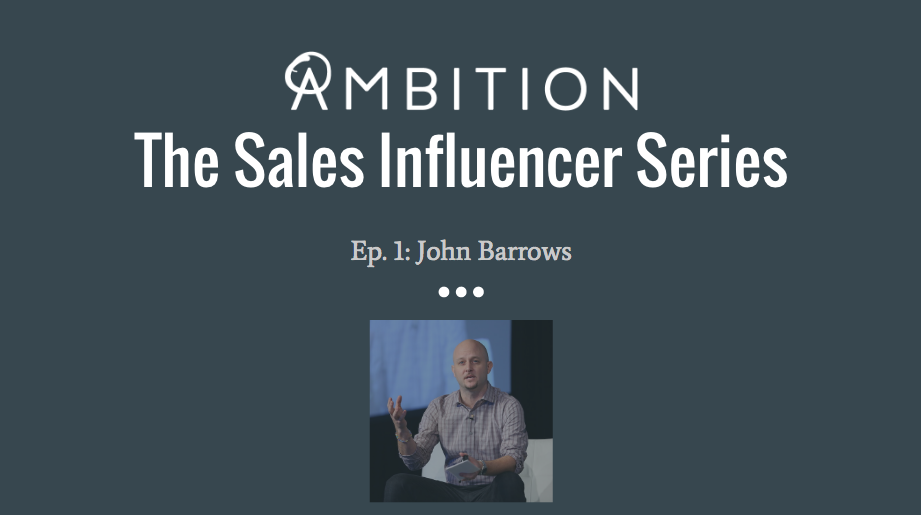 Welcome to Episode 1 of the Sales Influencer Series. Our guest today is John Barrows, the top sales trainer for industry leading tech companies such as Salesforce, LinkedIn, Box, Marketo, and Zendesk. John is also the Founder of Sales From The Streets, a free, brand-new home base for video training content on Sales.

Earlier this week, we interviewed John for an hour about the state of SaaS sales. This post contains that interview's most pivotal insights on five highly-relevant topics, and we're incorporating audio of John and I's conversation as well. There's a ton of important, actionable information John covered, so without further ado, let's get to the thought leadership.

We're psyched to welcome John Barrows to the Ambition Blog Today. John was kind enough to talk earlier this month and let us pick his brain about all things SaaS, modern Sales Management, and reaching the full scope of a multi-generational workforce.

If you haven't had the opportunity yet, check out John's war chest of great sales content at Sales From The Streets. Those who saw John speak at Dreamforce 2014 and the most recent Sales Hacker Conference will also vouch that he is a must-see live speaker. So if you have the chance to attend one of his engagements, do so by all means.

JH: First question John: How do you see the generational and technological shifts in the workplace impacting Sales Forces?

I'm 38 years old, so I think I'm in a pretty unique position, as far as age is concerned, because I can still look at the 50 and 60-somethings and remember how it used to be.

When deals came with eye contact and a handshake, and the phone was the primary way of getting in touch with people. The Boiler Room Inside Sales office. However, I'm also on the cusp of all the technology -- have all the cool tools and Twitter, and so forth -- so I can still somewhat relate to the kids coming out of school. From what I'm seeing in the Sales Forces that I train now, there really starts to be a generational divide around age 35.

The Predictable Revenue model somewhat addresses this issue, by having Reps start as Inbound Sales, then move to Outbound, and then to an Account Executive role. Naturally, by the time the Reps in this structure get to the Account Executive role, they're a little bit more mature and have a better set of skills, so you can treat them a little bit differently. But it's still something I see a lot of companies struggling with, especially with a lot of Millennials moving into the closing role.

JH: What's different about Millennials in the Sales Force? And how do these differences impact coaching?

I was just discussing this with some VPs of Sales from Millennial-heavy companies, like ToutApp. And a lot of these kids coming into the workforce, especially in sales, don't see money as their top motivating factor. It's all about workplace environment and recognition.

For me, it's really hard to swallow: A sales rep who is not motivated by money? If money is not one of your top motivators, what are you doing in sales, right?

The fact is, Millennials grew up with iPods and the digital age, and they're used to instant gratification, where once they do something they receive an award. If you give them structure, they will execute.

So that's where managers have to really figure out -- how much structure can I put in place here? Without bumping up against: "Here's the script." "Here's the template email." "Here's the list of questions I want you to ask, and you're going to get dinged for each one you miss."

Developing the right structure, or foundation, is critical. You need to give Millennial reps something to work with where they can apply their own personality, style and approach to that structure. Without being like: "Okay, here's your quota. Figure it out. Good luck." That's not going to work either.

The Cull of the Average Sales Rep

JH: What other developments are you seeing, in terms of sales processes and the industry as a whole?

The Challenger Sale really put it into writing: The old-school way of selling is pretty much over.

Relationship selling is over. The days of going out golfing with somebody and getting a big, fat contract off of that are over. And Solution selling is dying. The days of us asking the prospect a bunch of qualifying questions and producing a proposal based on what they tell us are over.

The days of adding value are here. And to that effect, I personally think that the average sales rep is going to die a painful death in the next 3-5 years. Because you have 3 things happening:

One: Automation and marketing are coming upstream. Technology has enabled companies to get increasingly targeted with their messaging. For example, every time I log into Amazon, I want to buy everything in front of me, because they know exactly what I want based on my buying history.

Two: Consumers now have far more access to information than ever before. You don't go in and ask a sales rep, what do you got? You have all the information. Now, if I as a consumer figure out I want something, I go on Google and do a search on it, find a few vendors, read reviews, look at chatrooms, and so on. Then, I figure out the 2 or 3 that I want to talk to. It's established fact that, in 2014, by time somebody comes to your Sales Team, they're already 60 to 70 percent of the way through the sales process.

Three: Sales Reps are just sitting there. Sales teams are smack-dab in between increasingly sophisticated marketing and more informed consumers, and they're not doing anything about it. They're still blasting out 5000 template emails. They're still calling people with a generic elevator pitch about how they're the "Leading Provider Of _____" that nobody cares about. And getting lazier ... and lazier ... and lazier.

To me, the average rep that doesn't think about the reason for their call, or do some homework before they engage with their client -- they're going to die a quick death in a very short period of time. Whereas, I also think a lot of older people need to start adopting newer, cooler technologies, and really, the new sales approach.

JH: How does technology factor into a Sales Rep's future success?

Someone came up with a really cool analogy at the SalesHacker Conference I just went to in New York -- and I want to give him credit but I can't remember his name for the life of me. But he said something that I think is totally relevant to older Sales Reps about technology, and it was an analogy between future Sales Reps and "Tony Stark."

It goes like this: Basically, Tony Stark is this brilliant, attractive, super rich baller of a guy. He's an unbelievable human being, right? And yet, there's no way Tony Stark, by himself, could ever win the fight he's facing. He has to have this suit to create Iron Man, and then he can go kick everybody's ass.

This analogy really applies to old school sales reps. You could be the best old-school sales rep on the planet. The best relationship developer, the best closer, et cetera. But if you're not using the new technologies that are out there: to help identify opportunities, to help figure better ways of engaging, and so on, you're going to be crushed.

Because there's this whole influx of other people that are using these tools and getting to customers. And you're not. So you're a dinosaur if you're not using these tools. The lesson here is: Sales is as much science as it is art.

JH: Tell us about Sales From the Streets, and what compelled you to curate all this great sales content in one place?

There's one thing I really hate to see, and it's people taking shortcuts. I can even remember writing a blog about this company who put out a huge report that inserting "Re:" in the subject line of your cold emails was the best way to get a response.

They're essentially advocating purposefully misleading a prospect, as a sales tactic. And I just put them on blast because when somebody asks you what you do, and you tell them you're in sales, those little things are what make people roll their eyes.

Those shortcuts -- even the smallest thing you do -- have an impact. And let me say this: When sales is done right: It's the greatest profession in the world. When it's done wrong: It's the worst.

Which goes to my overarching goal with Sales From the Streets. I'm trying to improve the profession of sales, and do it the right way, through group collaboration. We've all been through the sales trainings. We've all figured out what works and doesn't work. I just want to get those nuggets of information out there. So let's pool our insights, get them out in the open, and help each other out.