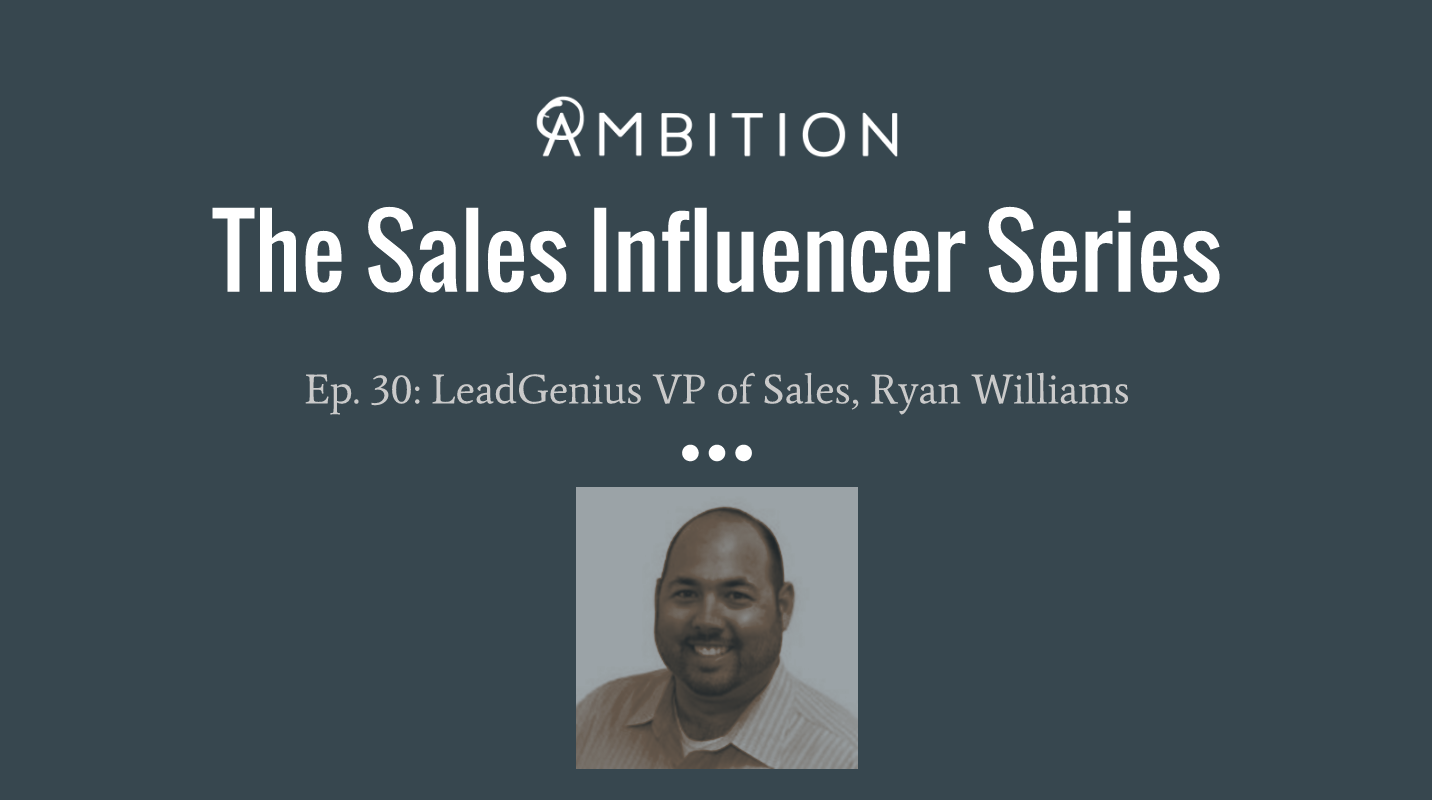 Welcome to Episode 30 of the Sales Influencer Series, a podcast featuring the brightest minds in B2B sales and marketing.

Welcome back. In today's episode, we welcome J. Ryan Williams, VP of Sales at LeadGenius, Founder at SalesCollider, and a distinguished, veteran sales leader of major tech companies in Silicon Valley. He joins us to discuss the biggest shifts he's seen in the people, processes, and platforms driving modern sales organizations over the last 8 years.

Ambition and LeadGenius have a deep partnership, having worked together on major projects like Bridging the Gap: The Ultimate Guide to Account Based Marketing and Selling Alignment. Ryan started out working for the Boys and Girls Club of Chicago. He originally wanted to be a teacher. But the organization ran out of money and he turned into a fundraiser for the club out of necessity. Eight years later, he transitioned into sales and found out the fundamentals of sales and fundraising were exactly the same.

In 2008, he made the move to the Bay Area and fell into boiler room sales, cold calling C-Level execs all day long. He eventually got on with AdRoll to start selling their nascent retargeting and prospecting platform. Ryan soon became the first sales manager for the mid-market sales organization, leading teams of up to 30 reps across the growing company. He moved on to several other organizations, and further distinguinishing himself as a sales leader before taking over as LeadGenius Sales VP in July 2015.

Ryan attributes his teaching backgroudn to his success in sales. He quickly ascertained that much of sales is about discovering a mutual interest and mutual goals that a prospect account is looking to accomplish. He also adopted the mindset: "How do I be as helpful as possible?" Which has served him well as both a rep and a manager.

The rise of Sales and Marketing Operations is the biggest platform-driven shift in B2B sales. Sales organizations are now under greater pressure, for better or worse, to adopt a multitude of platforms to drive their sales and marketing operations. The danger in this trend is that it's pushed some organizations to put the cart before the horse and start adopting heavy, expensive platforms before they're ready - which leads to disaster.

At LeadGenius, they start with an audit on the data prospects already have. Then they find the data that's needed, but missing. From there, they help define the market for the prospect based on relevant data points to that particular account - geographical info, firmographic info, and so forth. Ultimately, they give them a picture of their total addressable market. LeadGenius is considered a big part of the Account Based Marketing movement, which is heavily driven by technology. In Ryan's experience, companies that are transitioning to ABM are typically apt to do so as long as their sales teams are already thinking in terms of accounts, as in, I need to close this 20-person RFP committee to get this deal.

The research says most people will only be in sales for a few years. Ryan has seen a lot of people who get into sales with the goal of using it as a "gateway" to a different role in marketing or consulting. And very few of those people, in his experience, have succeeded. To Ryan, one of the most critical things about sales - and something newcomers fail to understand - is how nuanced B2B sales is, depending on what you're selling, who you're selling to, and what kind of company you're working for. Ryan thinks that one of the most detrimental things to new salespeople is the rise of content marketing - much of which can be wrongfully interpreted, misapplied, and adopted in the wrong situation. Startups in particular struggle with this. They don't know what they don't know, so to speak. And many end up going down the wrong Rabbit Hole based on what they see everyone else doing and reading/writing about it in the startup world.

With that said, Ryan is a big believer in empowering reps to conduct experiments and broaden their horizons within their role. For example, he allowed one LeadGenius rep to allocate 20% of his time to prospecting Indian companies and assess whether that would be a good, new market for LeadGenius. In doing this, the rep ended up improving his own ability to sell LeadGenius, significantly, while also conducting important market research for the company. To assist B2B startup founders unfamiliar with the sales world, Ryan has started a mentoring group called SalesCollider. The goal of the group is to create intersections between brand-new, technical founders and sales and marketing leader, bringing them together with people who have been in similar roles for a few years and have useful experiences and insights to share.

While the fundaments of sales have not changed, the modern sales process has thanks to the advent of new technology and the account based marketing movement. In essence, account based marketing is tech-enabled marketing strategy that enables sales teams ability to quickly gather key data points on accounts, acquire their contact information, map out an entire list of decision-makers at each account, deliver hyper-targeted content via various online channels, and retarget digital ads to attract and engage key decision-makers over the life cycle of their buying process. The central focus of ABM is sales-marketing alignment that empowers sales teams to prospect more intelligently, contact accounts more efficiently, and sell more effectively as a whole.

Ryan's favorite quote on startup sales: "Startups selling to each other are like drunks holding each other up at a party." Without attacking mid-market, enterprise and middle America, a sales organization have a very limited ceiling. Nonetheless, Ryan sees a lot of startups that are very myopic in that sense, rather than being focused on the end goal which is maximum market penetration. Startup sales organizations are also in a constant state of flux - they must be careful to conduct shifts strategically and in coordinated fashion across their company as a whole.

Ryan predicts that, if you're a sales leader in 2017, your main focus is getting costs in line. Namely, looking to keep costs associated with talent management, hiring, and recruiting down. In the tech industry, it's very expensive to hire new SDRs. It's challenging to keep high-performing Account Executives. It's difficult to keep technology and operations systems aligned with an ever-evolving team.

The big thing for Ryan is this: B2B sales leaders will be looking to figure out how they can optimize their reps by giving them more time to perform smart sales intelligence and develop relationships with their prospects. Ryan also thinks that concerns over technology's impact on operations and reps, alike, specifically whether or not it's serving as a distraction as opposed to an enhancer, is going to be top of mind. And last but not least, despite murmurs from around the industry about robots replacing sales professionals. Ryan is not worried about robots replacing B2B sales jobs, and won't be for at least 5 more years.

The best ways to reach Ryan are to provide feedback on his recent tutorial videos, where he whiteboards the key components of subjects like account mapping. You can find those on the LeadGenius Blog and connect with Ryan via email, LinkedIn or the Comments section. If you're a B2B startup founder, check out SalesCollider. There are great resources on there, including Ryan's all-time favorite instructional video: his interview with Box CEO Aaron Levie about how Box's business changed from selling to Directors of Marketing to selling to CIOs.