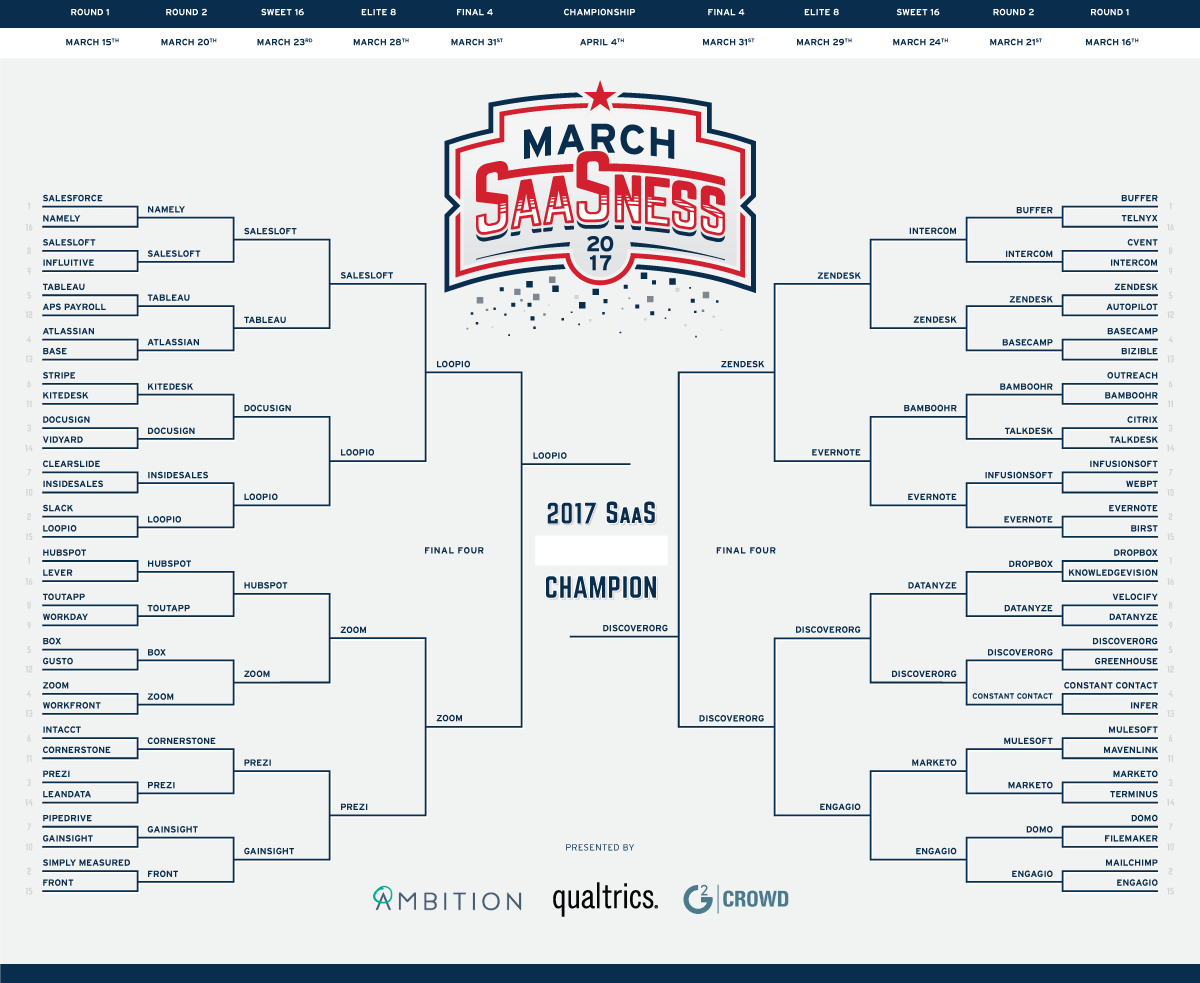 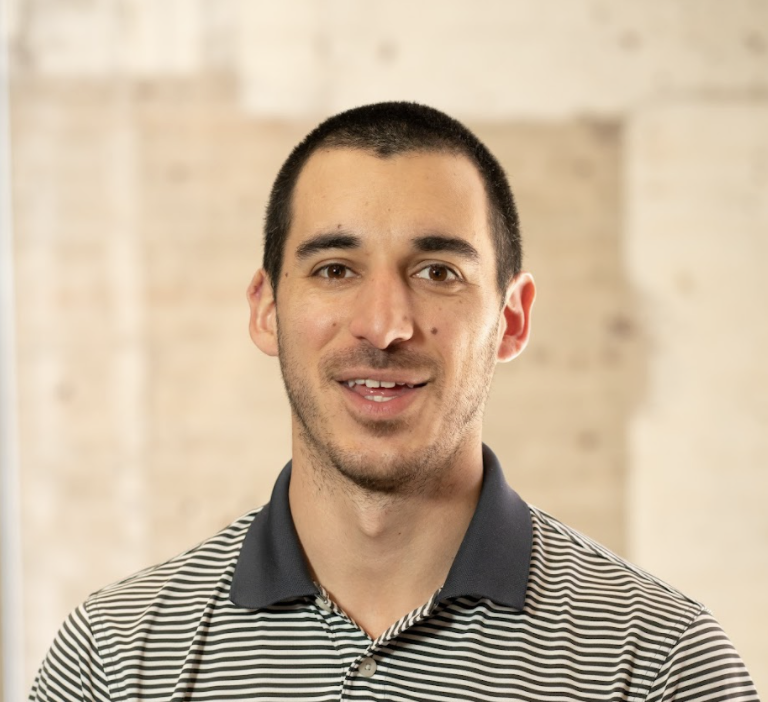 258,000 votes have been cast in Rounds 1-4. Our field has narrowed significantly. Only 4 companies have survived and advanced to the Final Four. Let's break down the matchups and see who has a shot at becoming our 3rd March SaaSness champion. 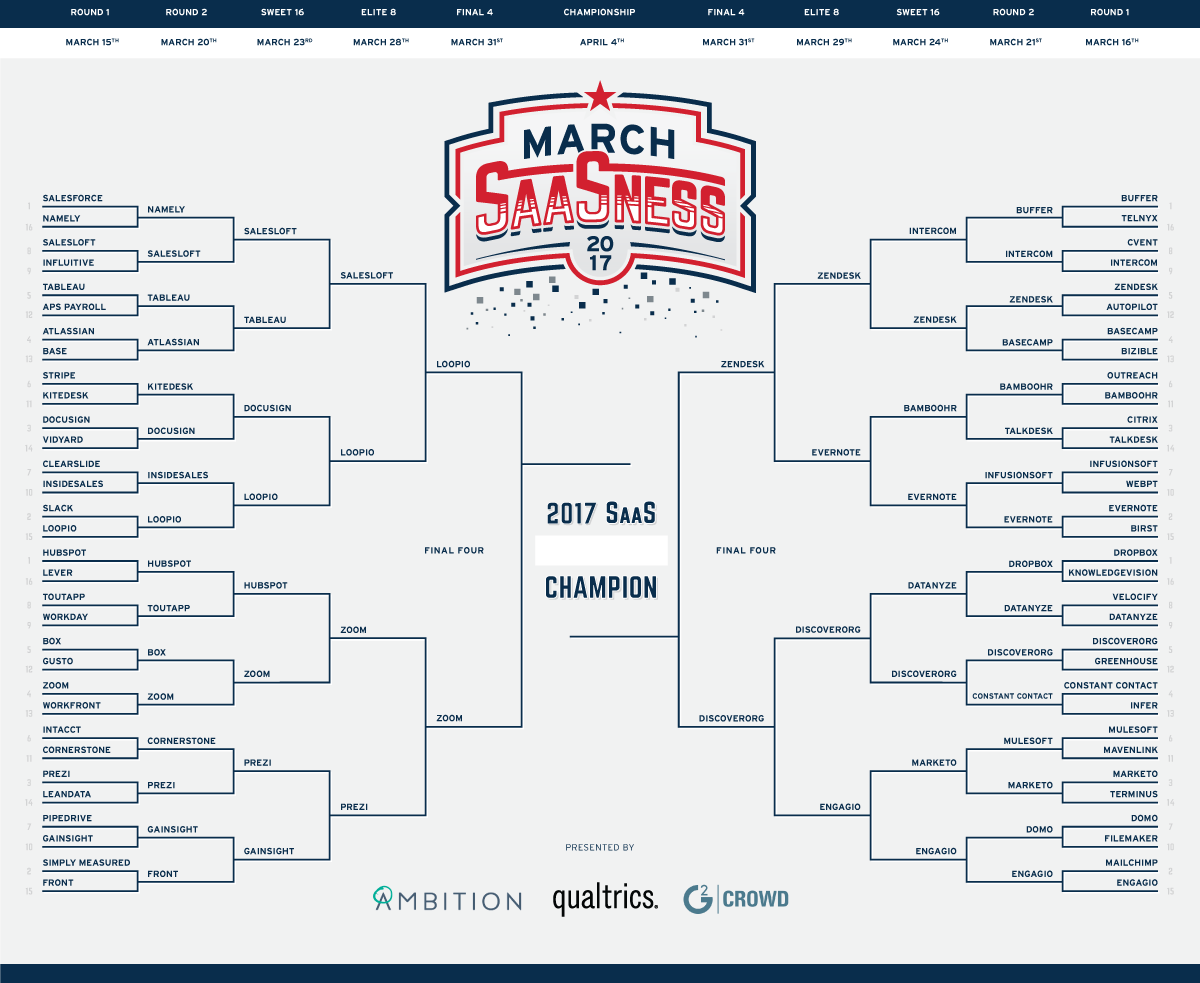 Here are brief introductions to our 4 remaining companies and analysis of how they stack up in their Final Four matchups. 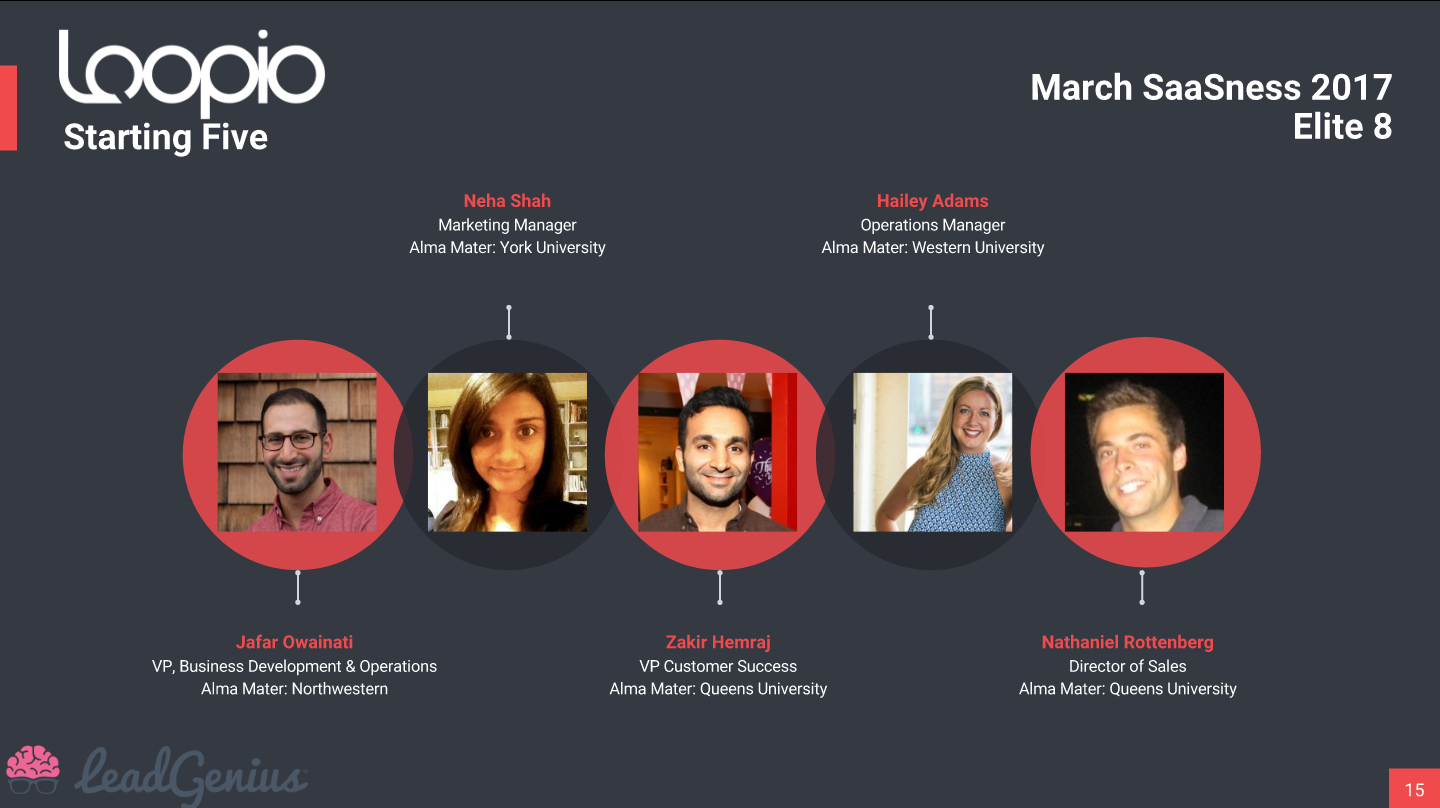 ​Tourney Background: In the 2017 tournament, Loopio responded to the epic challenge posed by their Round 1 matchup versus Slack. They hung close with the 2 seed into the final quarter of voting, then found a 5th gear to charge ahead and seal a spot in Round 2, where they utterly dismantled 2016 Final Four company, InsideSales. In the Sweet 16, Loopio got another tourney veteran: DocuSign. End result: another stunning upset and an Elite Eight matchup versus SalesLoft, where they shocked the world once again. Four straight upsets. A Final Four bid. And a date with Zoom ahead. Can Loopio continue its miracle run?

Company Background: Your reigning March SaaSness champions. A last-minute addition to the 2016 field, Zoom campaigned its way into the Field of 64 with a very exciting resume. At the forefront of video conferencing, Zoom seems poised to blaze a new trail in how companies communicate while making the world an even smaller place to do business. The sizzle and preliminary hype was backed up in spades, as Zoom launched an unforgettable run to March SaaSness history. 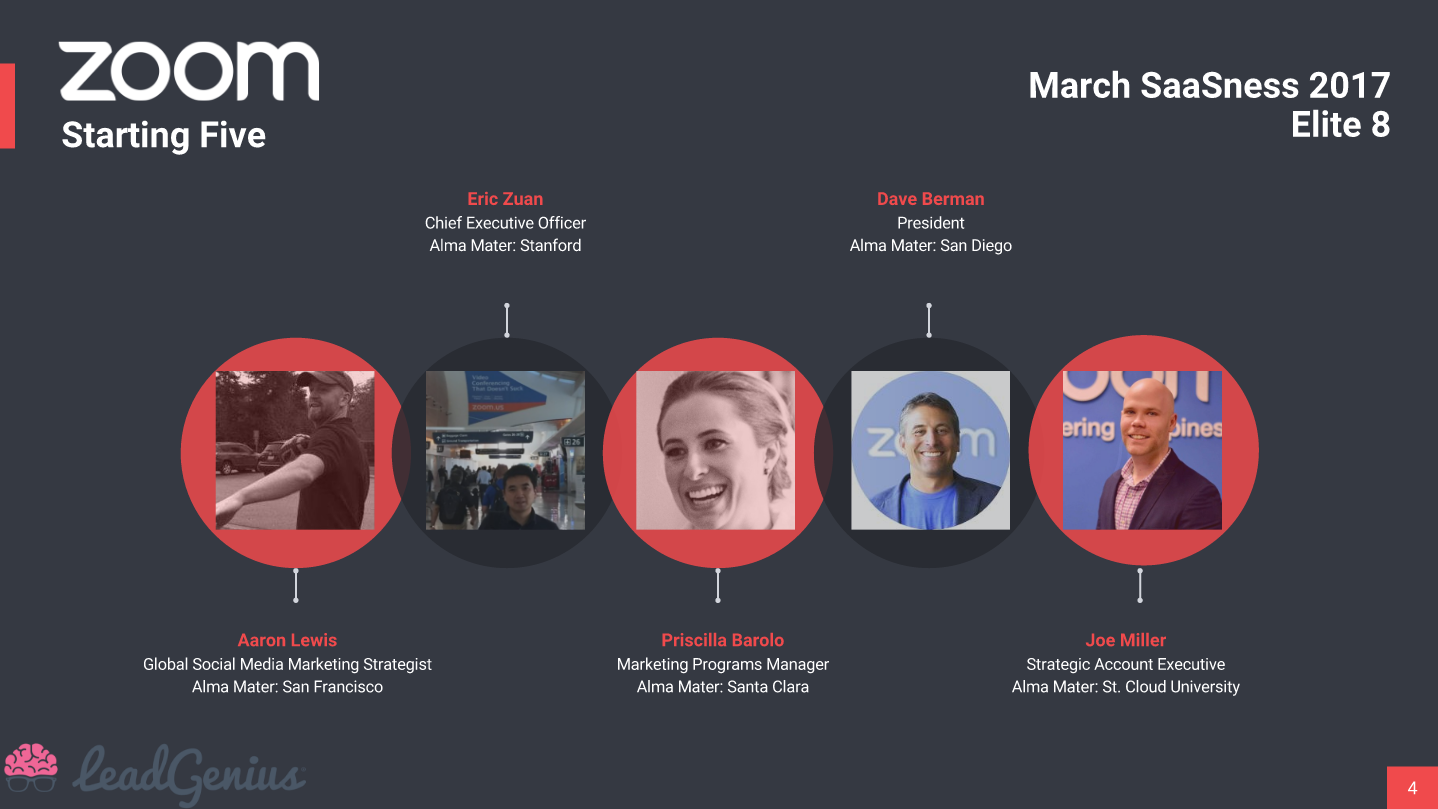 ​Tourney Background: Can Zoom repeat as champions in 2017? Their title defense began successfully with a Round 1 win over Workfront and an emphatic Round 2 takedown of Box. Two super heavyweight bouts took place in the Sweet 16 and Elite Eight, where Zoom fought off 1-seed Hubspot and 3-seed Prezi's late comeback heroics to advance to its second straight Final Four and keep the March SaaSness undefeated streak going at 10-0. Up next: the 2017 March SaaSness Cinderella, Loopio.

Company Background: Another SaaS IPO veteran, Zendesk began paving the way for streamlined, tech-enabled customer service a decade ago. Long-term backers Goldman Sachs, Redpoint Ventures and Matrix Partners have helped propel the company to the absolute zenith of the SaaS Customer Support space. A popular following in the 2015 tournament pushed Zendesk to the Sweet 16, where it lost a tough battle against DocuSign. 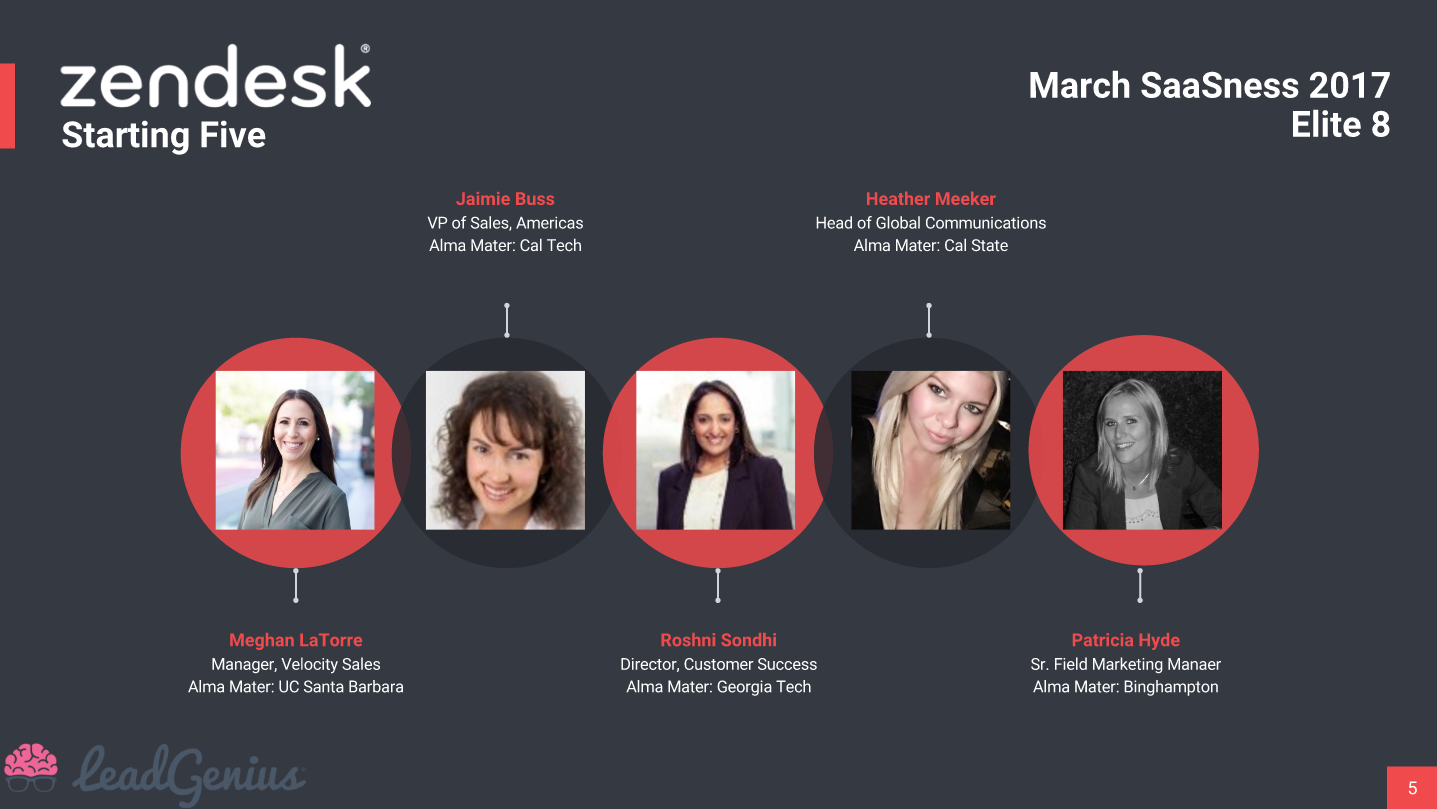 ​Tourney Background: A 2nd Round exit versus eventual champion Zoom ended Zendesk's 2016 run earlier than expected, but they'll once again be a tough out for any company in this year's tournament. Autpilot and Basecamp found out the hard way. The eyes of the Customer Success software world were on their Sweet 16 matchup versus Intercom. Zendesk took home the W and advanced to an Elite Eight matchup versus Evernote, where they performed their greatest feat yet: a stunning comeback in the last 15 minutes of regulation to steal the win and go to the Final Four. Up next: a meeting with DiscoverOrg. 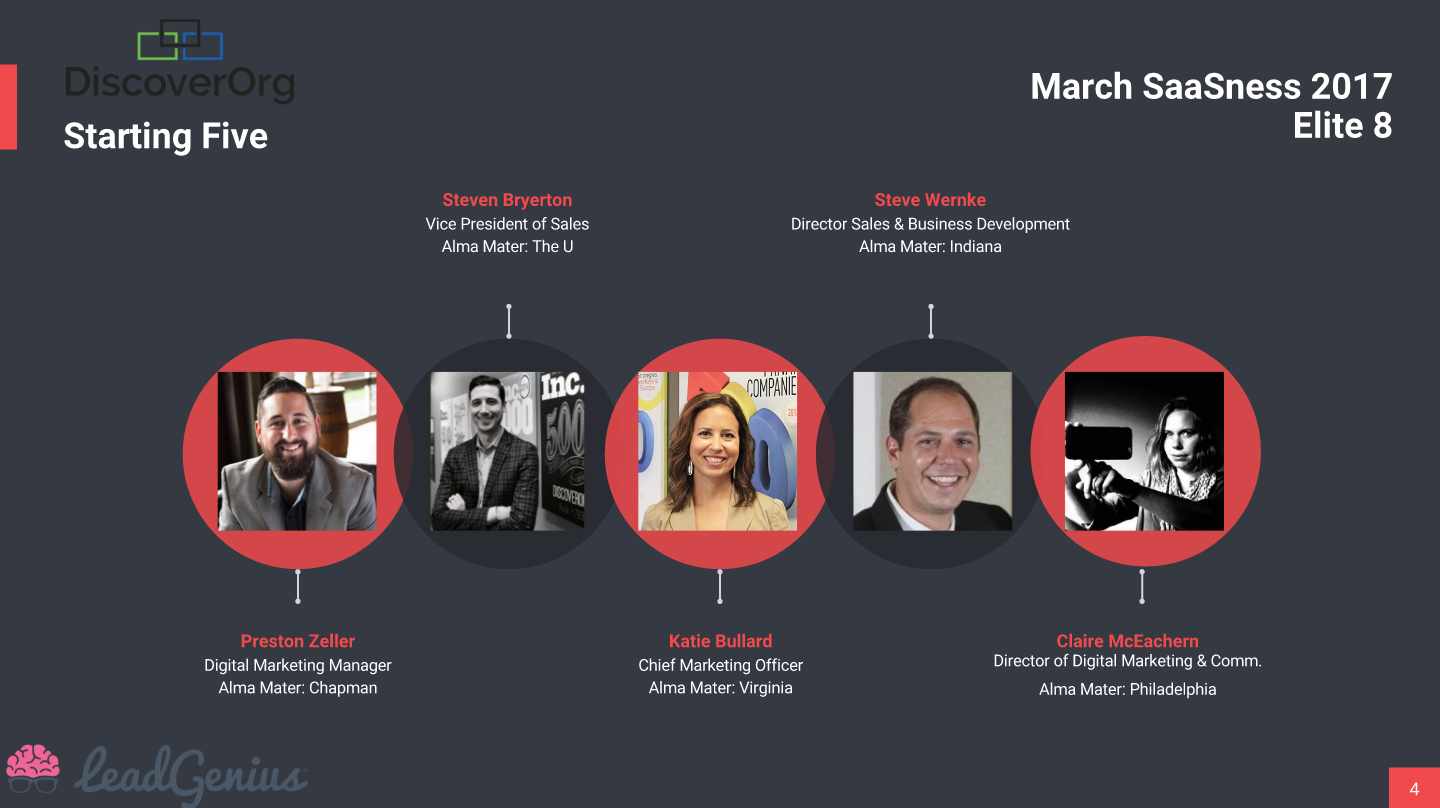 ​Tourney Background: DiscoverOrg put on memorable performance versus Greenhouse and Constant Contact in Rounds 1 and Round 2. A Sweet 16 date with industry competitor, Datanyze, ended in a landmark victory. In their Elite Eight matchup versus Engagio, DiscoverOrg pulled of a come-from-behind thriller, edging the upset-minded Whales and advancing to the Final Four. They meet Zendesk on Friday for a shot at the Championship Round.

The March SaaSness Final Four kicks off on Friday, March 31st at 12am EST. Follow Qualtrics, G2 Crowd and Ambition on Twitter for live score updates, analysis and final results for each matchup.