64 SaaS companies entered our NCAA Tourney-style bracket, where each winner was to be decided by popular vote. And now, one company reigns supreme above them all. 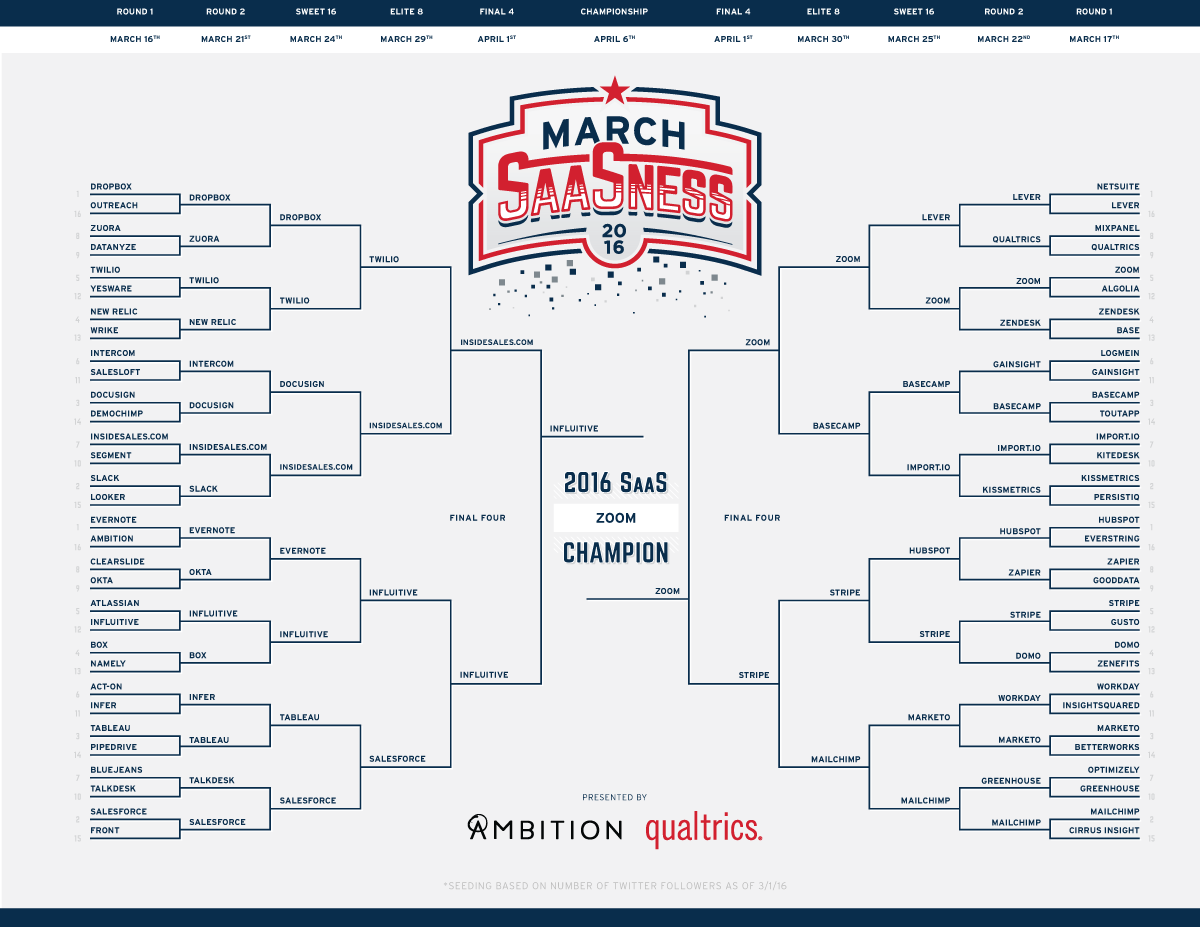 A last-minute addition to this year's field, Zoom campaigned its way in and got the Selection Committee to take notice of a very exciting resume.

At the forefront of video conferencing, Zoom seems poised to blaze a new trail in how companies communicate while making the world an even smaller place to do business.

Lots of sizzle. Lots of preliminary hype. We wondered if Zoom could back it up.

Round 1: The blitzkrieg began. Zoom slaughtered Algolia in a resounding Round 1 victory.

Round 2: Zoom stunned Zendesk - seizing a massive overnight lead and coasting to an easy win.

Round 3: Tournament Cinderella, Lever had the momentum, the dramatic early wins and the plucky determination. Zoom had zero interest in a fairy tale ending.

Round 4: There's no delicate way to describe Basecamp's fate in this matchup. This was a grisly massacre.

Round 5: Stripe crawled to within 20 percentage points of Zoom late in this matchup. The comeback attempt stopped there.

Round 6: Finally, the true challenge. Influitive stormed back to take a late lead - and for a moment, Zoom's shield of invincibility seemed to be crumbling before our eyes. Then they put their foot back on the gas and never looked back. 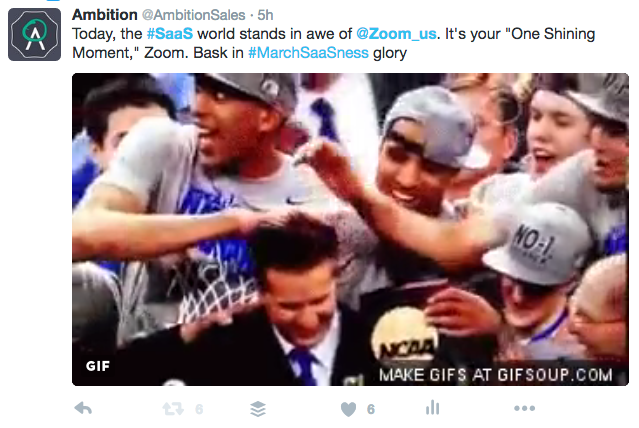 What's Next for Zoom

Congratulations, Zoom! You guys are a worthy champion and join the elite club of SaaS companies (iClearSlide) to have been dubbed March SaaSness Champion

Thanks to everyone who participated in this year's tournament. Special thanks to the team at Qualtrics, who did an amazing job co-hosting and elevating the 2016 Tourney to another level.

We'll leave you now with our top 5 moments from the 2016 March SaaSness Tournament. Until next year!

This one was a blast. Two companies with huge personalities. Tons of firepower on both sides. 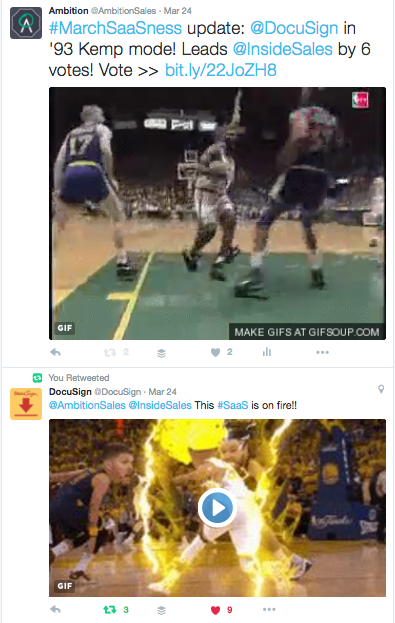 Numerous lead changes. A final ISDC push to take down the 2015 Runner-Up.

You could tell when Influitive really started sensing the upset in this one. The later it got in the match, the rowdier things got on Twitter.

No question who brought the most swagger to March SaaSness 2016. Influitive buried the needle.

You can count on it every year in the actual NCAA Tournament. The day where every matchup seems hell-bent for an epic, photo finish, as if ordained by the Gods of Sports Drama. Well in March SaaSness this year, that day was March 22nd.

Each matchup received thousands of votes. And yet, 2 of the 8 matchups were decided by less than 10 votes. Another: less than 40. And just when we thought things had settled down...

2. Lever beats Qualtrics at the buzzer.

This was a March SaaSness first. After storming back from a 130-vote deficit in the final 45 minutes of voting, Lever appeared to fall 1 vote shy of tying Qualtrics as the voting survey expired.

We announced Qualtrics as the winner and offered condolences to Lever. Then, 45 minutes later, we did one last refresh on the survey results. Lever had gained the advantage by 2 votes. 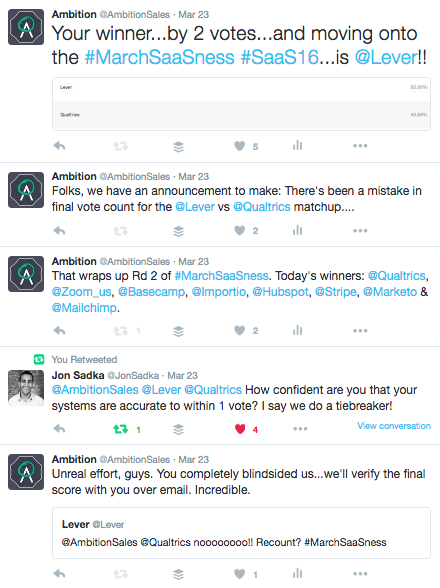 What followed: A sheepish Twitter announcement corrected the final outcome, and we found a sudden, newfound respect for every referee who'd blown a call in a big game. You couldn't make this stuff up.

Influitive was down 1,000+ votes as we entered the morning hours yesterday. Little did we know there were still 45,000+ votes to be cast.

It was a fitting end to the tournament. Influitive surged back to a 14% lead late in the afternoon - finally giving Zoom its first tourney deficit. 8 hours remained on the clock, though. 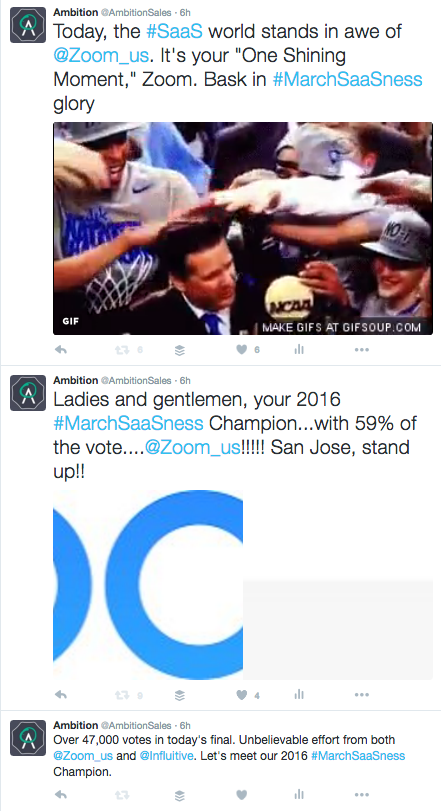 Zoom pulled out a comeback of its own to take the lead for good and claim the 2016 March SaaSness Championship.

Congrats again to Zoom, our 2016 March SaaSness Champion. Revisit the 2016 Tourney any time at ambition.com/saasness/. See you next year!