Meet the companies competing in the March SaaSness Elite 8.

Only 8 companies have survived and advanced to Round 4. Let's break down the matchups and see who has a shot at entering the Final Four.

Here's a look at the updated 2016 Tournament Bracket heading into Round 4. 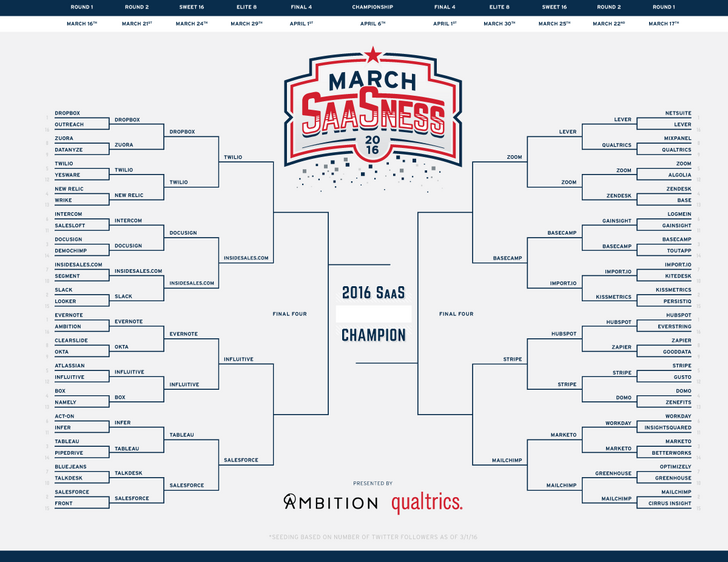 Styles make fights, and we're about to bring you a brief introduction and breakdown of each competing company and how they stack up in their Elite 8 matchups.

Before we dive in, we also want to note that this year's March SaaSness winner will receive a Blueboard experiential reward to deliver to their tournament MVP.

Twilio: When you've got a client list that includes such prestigious and diverse names as Uber, Box, DocuSign, Nordstrom, Coca-Cola, Walmart and Home Depot, you know you're doing something right. And Twilio has spent the past 7 years integrating and streamlining various communication technologies to equip businesses to attack the digital marketplace head-on. A new addition to this year's field, Twilio has made its presence felt with a slew of impressive victories, starting with the systematic dismantling of Yesware and New Relic in Rounds 1 and 2 and culminating in a narrow, comeback-thwarting Sweet 16 win over top-seeded Dropbox. With 3 of the 6 victories needed to win March SaaSness behind them, Twilio now enters the Elite 8, where they'll face a surging InsideSales.com.

InsideSales.com: One word: powerhouse. InsideSales is quickly becoming a monolith in the sales acceleration space, dipping its toes into phone systems (PowerDialer), predictive analytics, CRM automation, and even a sparse gamification feature. Routed in the 1st Round of last year's tourney, ISDC enters the Elite 8 of the 2016 tournament looking like a completely different competitor. A Round 1 win over Segment set the stage for a stunning upset over Slack in Round 2, followed by an epic, come-from-behind Sweet 16 victory over last year's runner-up, DocuSign. Will ISDC continue its capitvating run to the Final Four? The Silicon Slopes stalwart must first go through Twilio. Their anticipated Elite 8 matchup starts Tuesday at 12am EST.

Influitive: Another new entrant to this year's tournament, Influitive also doubles as the sole representative from America's neighbor to the north. Moreover, they bring an exceptionally unique platform to the table that allows companies to activate their customers and transform them into referrals, warm leads and word-of-mouth inbounds. And as any SaaS marketing director will tell you, 1,000 blog posts will never equal the value you can get from 100 actively evangelical customer advocates. To their credit, Influitive has used March SaaSness to put on an impressive advocacy showcase, riding their supporters to three epic upsets in this year's tournament - consecutive come-from-behind victories against Atlassian and Box and a TKO of Evernote. Can the last remaining double-digit seed continue its thrill ride all the way to Final Four? A daunting Elite 8 matchup against Salesforce is the final obstacle.

Salesforce: We don't have to introduce you to Salesforce. They're like the Duke, Indiana, or Kentucky of SaaS: You may have zero interest in the industry, but by God, you know who they are and their reputation precedes them. And yet, SFDC bowed out in embarrassing fashion in last year's tourney, falling to 8th seed Optimizely in the 2nd Round. All the influence and brand awareness in the world goes out the window once voting goes live for a March SaaSness matchup. As the old saying goes, if the game was decided on paper, there'd be no reason to play. But Salesforce has sure come to play in this year's tournament, ending any upset designs held by Front and Talkdesk early in Round 1 and 2 matchups and grinding out a thrilling, last minute comeback against fellow industry titan, Tableau, in the Sweet 16. An Elite 8 matchup against hot upstart Influitive is in store for Tuesday and presents an intriguing contrast in styles for the CRM juggernaut and its competition. Stay tuned.

Zoom: A last-minute addition to this year's field, Zoom campaigned its way in and got the Selection Committee to take notice of a very exciting resume. At the forefront of video conferencing, Zoom seems poised to blaze a new trail in how companies communicate while making the world an even smaller place to do business (good news for companies like Ambition). Lots of sizzle, lots of preliminary hype -- we wondered if Zoom could back up the hype. A series of staggering blowouts has given us our answer, as Zoom ran through Algolia, Zendesk and Lever in Rounds 1-3 like a wheat thresher through a farmer's field. Can their devastating efficiency continue in an Elite 8 showdown against Basecamp? We'll find out on Wednesday.

Basecamp: An interesting new addition to this year's tournament, Basecamp is a favorite software among many companies thanks to its user-friendly interface, customizable collaboration settings and a tendency to make project management less of a pain than it usually is. Incredibly, Basecamp also doubles as the lone March SaaSness representative from America's 3rd largest city, and, even more incredibly, the only 2016 March SaaSness company that operates primarily out of the Midwest. Basecamp looked tough in convincing victories over ToutApp and Gainsight, and that was before they fought off perhaps the peskiest competitor in this year's tournament, Import.io, in the Sweet 16. Will they be able to stop Zoom's incredible run in the Elite 8? We'll find out Wednesday.

Stripe: Another household name in SaaS, you might remember Stripe as the SaaS company that earned a $3.5 billion valuation 4 years after it was founded. No small feat, unless you compare it to the company's most recent valuation in August 2016, which totaled a cool $5 billion dollars. Unfortunately for Stripe, though, all those big numbers mattered little to upset-minded Front in Round 2 of last year's tourney. Stripe's 2nd Round exit fell way short of projections. We were optimistic that 2016 would be a better showing for the payment juggernaut. Stripe has validated us so far, with a stellar Round 1 win over Gusto, a gutsy Round 2 victory over Domo and a narrow Sweet 16 upset over HubSpot. An Elite 8 matchup versus Mailchimp should be yet another slugfest for the battle-tested payments leader.

Mailchimp: MailChimp is the SaaS elder statesman that continues to carry itself like a hot, young upstart. The Atlanta-based marketing and email automation company has always been ahead of the curve, pioneering a cozy, friendly user experience. They give away their (great) product to users whose email lists don't exceed 2,000. Their reputation as a great place to work is known industry-wide. Plus, they had the foresight to sponsor Serial. MailChimp may have lost last year's Battle for Atlanta, but they've proven to be dangerous in this tourney. Their Round 1 pummelling of Cirrus Insight, hard-earned Round 2 victory over a plucky Greenhouse opponent and impressive Sweet 16 KO of fellow marketing automation heavyweight, Marketo have set the stage for an Elite 8 battle versus Stripe. Are we betting against Mailchimp making the Final Four? Not after hearing legendary sports journalist Bill Simmons give them a shout-out for sponsoring his new podcast, The Ringer. Mailchimp was made for this moment.

The 2016 March SaaSness Tournament Elite 8 Round kicks off on Tuesday at 12am EST. Follow Qualtrics and Ambition on Twitter for live score updates, analysis and final results for each matchup.