The tournament to decide the top SaaS company of 2015 began two Thursdays ago with 64 companies. Now, two weeks and over 16,000+ votes later, only 4 companies remain in the March SaaSness Tournament.

For those of you unfamiliar with March SaaSness, these three links will give you everything you need to know.

First, our Selection Sunday Tournament Announcement. Next, our breakdown of how the Tournament works. Finally, our profile of the entire March SaaSness Field.

The short version: March SaaSness is a vote-based, March Madness-style tournament to decide the top SaaS company of 2015.

The participants: 64 SaaS industry leaders, seeded according to number of Twitter followers. The format: A massive, March Madness-style bracket. The scoring methodology: Popular vote, taken from 9am to 9pm EST the day of each match.

And now, we're down to our Final Four. Voting for the semi-final matchups will take place tomorrow, starting at 9am. Voting for the championship match will begin Friday, at 9am. At 9pm Friday evening, we will crown the winner of our tournament as the top SaaS company of 2015. 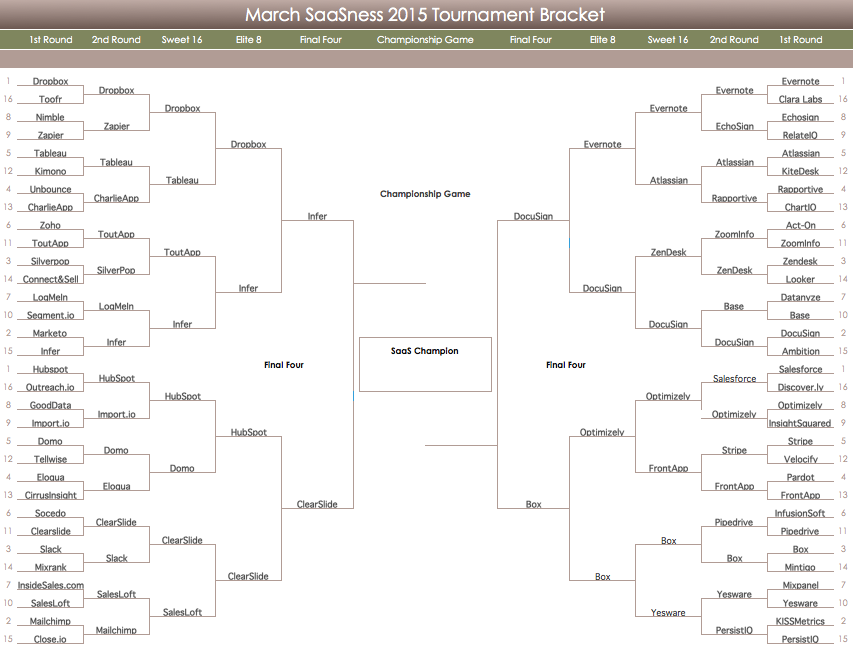 As custom, we'll be live updating the 'scores' (voting results) of all of our matchups on the Ambition Twitter account.

This edition of our matchup previews will be a little different than those prior. We're adding two new sections under each team, recapping how they got here and determining an appropriate, historical March Madness counterpart that the company most resembles.

If you've missed the prior tournament action, this is a good chance to catch up quickly. Final note: We purposely are comparing each company to a Final Four team that didn't win a championship. Like the good sports fans we are, we take reverse-jinxes very seriously here at Ambition.

Fresh off a $25 Million Series B Round and backed by SaaS heavyweights such as Redpoint Ventures and Andreesen Horowitz, Infer represents the new vanguard of predictive analytics. Utilizing tons of data points to "score" a company's leads and prospects as they progress through the sales funnel, Infer is a powerful tool and a hot name in SaaS.

How They Got Here: A campaign of Giant-Slaying unlike any ever seen before. The craziest thing about Infer's run is that they got absolutely zero breaks in terms of matchups. They had to take out the top 3 seeds in their region to make the Semi-Finals, and not only did they do that, they rarely trailed in the process.

After shocking 2-seed Marketo in Round 1, Infer then upset highly-competitive 7-seed LogMeIn in Round 2 and utterly eviscerating SilverPop in the Sweet 16. The final step -- an epic victory of Dropbox, cemented their place in the Final Four.

The '13 Shockers, a 9-seed in that year's tournament, went on a scorched earth campaign through their region, culminating in a Final Four appearance that few outside of the Missouri Valley Conference thought possible. The fearsome ease with which Infer dispatched of its region's top seeds bears remarkable resemblance. It took a Herculean effort from eventual champions Louisville to dispatch of the Shockers -- it's going to take the same to topple Infer.

Clearslide aren't just the newfound possessors of a $50 Million Series C Round. They're a leading-edge tool that provides valuable insight on customer and prospect interaction, bringing advanced data analytics to the actual communication exchange between sellers and prospective buyer. Backed by Greylock Ventures and a team of other household name VC's,

How They Got Here: Clearslide had to survive two of the most memorable matches in this year's tournament in order to make the Final Four. After a convincing Round 1 win over 6-seed Socedo, they ran into tourney favorite Slack in Round 2. A massive run late in the matchup sealed one of the tournament's biggest upsets. Slipper: Meet foot. Incredibly, ClearSlide's toughest test was yet to come -- that would be their Sweet 16 bout with SalesLoft.

The instant classic saw our highest voting turnout of any single March SaaSness matchup, as the two companies traded blows in a way that echoed March Madness classics like the 2010 Xavier vs Kansas State match. After the dust settled, it was ClearSlide advancing to meet 1-seed HubSpot in the Elite 8. They would claim the lead early and never look back, beating the odds to become their region's representative in the Final Four.

Looking back, Butler's 2nd consecutive Final Four run remains one of the most impressive in March Madness history, for unique reasons. There are uncanny resemblences here. The duality of 2011 Butler is memorable. They were a mid-major that -- just one year earlier -- had come inches away from winning the National Title. They had lost that season's star player and were seeded relatively low (8-seed), and yet they still seemed as dangerous as any team in the tournament. They weren't a juggernaut, but they were a program clearly on the rise. And their fans needed to see a cardiologist during the final minutes of each of their four wins en route to the Final Four.

In the SaaS industry, ClearSlide commands respect, but few could have foreseen them knocking out 2 household names like Slack and HubSpot. They may not have had the consistent spree of drama that Butler did, but they did have the most action-packed, heart-pumping tournament victory thus far in their memorable bout with SalesLoft. No one was sleeping on ClearSlide, but they proved themselves to be more formidable than some of the biggest SaaS industry names in our tournament.

DocuSign is the creme-de-la-creme of E-Signatures and is a company in need of very little introduction. Its users number in the millions, it's beloved by closers everywhere, and it has made a task every person to walk this Earth has hated since the beginning of time, signing documents, much less painless.

How They Got Here: DocuSign was also the 1st Round opponent of our company, Ambition, surviving our upset bid by a mere 12 votes and forever earning our antipathy (just kidding, we use them to close deals every day so we're only slightly bitter).  They easily dispatched of Base in Round 2, leading to a massive Sweet 16 matchup with ZenDesk. In dramatic fashion, they were able to stave off a frantic late run from ZenDesk and enter the Elite 8, where they conducted their own late push to get past 1-seed Evernote and make the Final Four.

As a 2-seed in the 2010 NCAA Tournament, West Virginia embarked on one of the most underrated Final Four runs in recent memory. This team was eminently engineered to not capture the imaginations of the public. They were a force in the Big East, college basketball's then-top conference, that year. So they weren't an underdog. Their coach was the legendarily gruff and perpetually scowling Bob Huggins, who coached his teams to be gritty, physical and fundamentally sound. Then, their Elite 8 matchup with overnight juggernaut Kentucky happened, and lo and behold, they captured the imagination of the college basketball world.

It's lonely at the top, and DocuSign has dominated the E-Signature industry, it's own little corner of the SaaS industry, for so long that they've made themselves repellent to things like "hype" and "fawning TechCrunch articles." How much personality can an E-Signature company have, right? We found out in March SaaSness, when tweets about "digital Wheaties" began popping up with frequency from the DocuSign twitter account, as they efficiently plowed through competitor after competitor. Their matchup with Evernote, a rightfully beloved SaaS industry darling, was the March SaaSness equivalent of the 2010 Elite Eight where West Virginia stunned Kentucky, with Coach Huggins showing a stunning display of affection in its final moments with his injured star player. Don't believe the hype, believe the results, SaaSness viewers. DocuSign has them.

​We said it in our Tournament Preview: Box is as dangerous as any 3-seed in this tourney. The cloud storage solution is a household name. A January IPO, valuation north of $1 billion, and designation as 1 of the 5 SaaS companies your grandmother might actually know are just a few of the many, many things Box has going for it.

How They Got Here: Box began the tournament in our "Region of Death," designated as such to the the imposing group of companies (Top 5 seeds: Salesforce, KISSmetrics, Box, Pardot & Stripe) clustered that corner of the bracket. Box blew past Mintigo in Round 1, but chaos was beginning to ensue around them, as 2-seed KISSmetrics and 4-seed Pardot were both stunned in First Round upsets. It would be an ominous sign for what lay ahead in Round 2, when Salesforce became the first 1-seed to fall and Stripe suffered a heartbreaking, single-vote loss to FrontApp that recalled the 2005 Vermont vs Syracuse finale. Box was this close to becoming similarly victimized by Pipedrive, who closed the voting gap to 4 votes before running out of time to complete their comeback.

Box's reward: Entering the Sweet 16 as sudden heavy favorites to emerge from their region. They put the Kentucky treatment on friendly adversaries Yesware and advanced to face a streaking Optimizely in the Elite 8. It would be another one of the tournament's instant classics, as the voting record of the final 5 minutes will attest. Box's margin of victory: 3 votes. In true March Madness fashion, they lived up to the mantra "Survive and Advance" in getting to the Final Four.

The pedigrees. The talent. The 2nd Round scare against a much-lower seed. They're all here. UCLA's region that year also quickly shifted from a "Region of Death" to a region of chaos -- they're two most formidable adversaries, Duke and UConn, were both gone by the end of Round 2. Like UCLA, Box proved to be the lone survivor. The only comparison that's murky is whether Aaron Levie is Box's Russell Westbrook or Kevin Love.​

It's been an amazing three weeks since we first announced our tournament to declare the top SaaS company of 2015. The positive response to March SaaSness, from the competitors and the general public alike, has been simply overwhelming. Our thanks go out to Docurated for covering the tournament last week.

After 4 rounds, 60 matchups and 15,000+ votes, we're just over 48 hours away from crowning this year's champion. To everyone who has participated in some way with March SaaSness, thank you so much -- you guys are the reason this has been so much fun. We'll see you Thursday at 9am, when our two semi-final matchups tip off.

Ambition is endorsed by Harvard Business Review, AA-ISP (the Global Inside Sales Organization), and USA Today as a proven solution for sales teams looking to run hyper-engaging sales competitions that accelerate revenue. Contact us and build your March Madness themed sales contest.