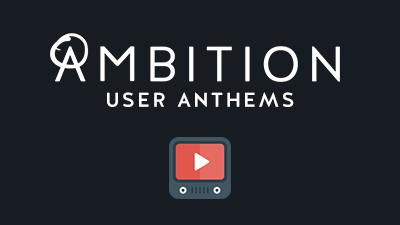 Welcome to the third installment of our "Top Ambition Anthems" series, where we profile the most epic Ambition Anthems our users have chosen to celebrate their personal achievements over the past few months.

Before we get to the list, we should start by answering a critical question for the uninitiated: What's an Ambition Anthem?

Look at it this way: Mariano Rivera, Rocky Balboa and Dwyane "The Rock" Johnson get their own theme music. Why shouldn't your sales team members?

Ambition users have that option. And as you're about to find out, they have A LOT of fun with it. These were our 5 favorite Ambition Anthems from the past few months.

As with our other Top 5 lists, we received an incredibly diverse set of submissions.

Some users nominated a peer's Ambition Anthem, while others nominated their own. (You guys are nothing if not confident -- never change).

Our picks are in. Congrats to this month's winners. Ladies and gentlemen, here are our Top 5 Ambition Anthems from the first month of 2016.

Before we jump into our analysis, let's take a step back and acknowledge that this month's top Ambition Anthem couldn't be further removed from our first two winners.

"Ante Up (Remix)" is hilariously over-the-top throwback to early 2000s rap. Again all odds, it's the most fun song about committing Class 3 felonies ever made.

Start to finish, everything about this song is over the top. The lyrics ("Rock the ski mask whether it's June or February!"), production (ear-splitting) and energy of "Ante Up" are at an elite level.

All that said, there's one singular reason we put this submission above all others as our Top January Ambition Anthem. Listening to it in the right frame of mind can make a sales rep feel bulletproof.

What happens to the first objection some poor, unsuspecting prospect throws at Steam broker after this song gets played? It gets incinerated.

One day, some Psychology Journal is going to publish a study finding that it's scientifically impossible for sales reps to buckle in their next cold call or prospect demo if the last song they heard beforehand was, "Ante Up (Remix)."

Congrats to Tyler and the Steam Logistics team, excellent choice.

Major respect to Brandon Gentry for giving Ambition Anthems a new best practice: When in doubt, choose a classic clip from the Chappelle Show.

This is a classic triple threat Ambition Anthem.

2) It's distinct as hell. No one at ChowNow is wondering who just crushed a goal when this thing comes on."

3) It stays in your head the rest of the day. I wonder how many times ChowNow reps hear "Dy-Lan! Dy-Lan! Dy-Lan!" uttered in a terrible British accent by their peers on the sales floor.

If it's less than 50, then congratulations, you guys are a lot more mature than most young professionals I hang around.

Amazing selection, Brandon. You also just drove home a critical point about Ambition Anthems: they don't have to be songs. TV and movie clips, viral videos, basically anything that fits company HR standards is up for grabs.

Want to celebrate closing deals by watching Randy Orton RKO a rocket? You've got it!

It's like Wes Walker wrote this song knowing that, months earlier, modern technology had enabled sales reps to celebrate Belfort-ian conquests of revenue by having hand-picked YouTube videos start playing, on cue, right in the middle of their sales bullpen.

As Fitzmark Director of Sales Matt Freel astutely pointed out in his nomination, "Jordan Belfort" isn't just an Ambition Anthem. It's the quintessential Ambition Anthem.

For Exhibit A, let's go to the video.

Lyrics: The hook of this song goes, "I've been getting dirty money; Jordan Belfort." I think we can move on.

Artist: I mistakenly first thought that the Malibu's Most Wanted casting call reject who wrote this track went by "Wes Welker," marveling at who would pick a 5'6 wide receiver as his rap alias.

Then I realized the last name was "Walker," not "Welker." Not quite as Ambition Anthem-ready, but I'm 97 percent sure I've been cold called by a Wes Walker at least once in the past 6 months. Cool dude, if I remember correctly.

Way to set the example for your team at Fitzmark. All you VPs, Directors and Managers out there, there's a word for Matt's choice of Ambition Anthem. It's called leadership.

Gotta hand it to Steam Logistics CEO Steve Cox. We've seen some bizzare Ambition Anthems before, but this one blows the rest of them out of the water.

What makes this Anthem so great is that it flies in the face of the prototypical "Ambition Anthem" everyone expects.

When the countdown to an Anthem begins, you expect to hear and see something that's going to fire you up, make you laugh or motivate you to buckle down.

When Steve Cox triggers his Anthem at Steam Logistics, here's what his brokers get instead.

That, my friends, is how you know you've chosen the right company to work for. For god's sakes, you could be listening to Ken Krogue's playlist at InsideSales. (Because when I need to get pumped up, I head straight to Spotify and queue up some Natalie Merchant).

Bonus points to Steve for originality, creativity and a boundary-pushing Ambition Anthem. If this inspires at least one Ambition user to choose an Aqua Teen Hunger Force clip as their next Anthem, you've made the world a better place.

5a. Gentry Smith. Reliance Partners. "Respect This Hustle" by T.I.

5th place this month goes to two Ambition Anthems that will take Ambition users between the ages of 23 and 30 back to Spring Break.

Now also seems like the right time to remind users that anytime you're choosing an Ambition Anthem with a title like, "Respect This Hustle" (or any song with the word "hustle" in the title, for that matter) there's a 95 percent chance you're making an appropriate decision.

Fitzmark strikes again with this impeccable selection by Krista Gonderman.

User Pro-Tip: You can pick pretty much any song an Atlanta rap artist dropped between 2000 and 2008 and it will work perfectly as an Ambition Anthem.

It's heartwarming to see Krista keeping the legacy of Dem Franchise Boyz alive and in the offices of Fitzmark.

Congrats once again to all those who made this month's Top 5 Ambition Anthems list. Your selections have disturbed, enlightened and inspired us -- often all at the same time.

We'll be back soon with another edition of our Top 5 Anthems list. For more information on Ambition Anthems and other product features, check out our Academy page and our interactive product demo.

And as always, thanks to all of our committed Ambition users. We're privileged to work with you guys -- and already eager to start receiving next month's nominations.