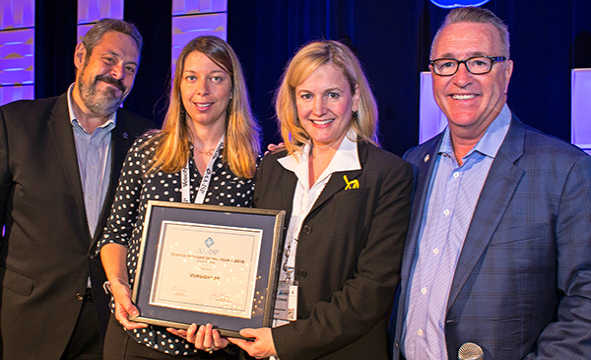 How Vorsight Used Ambition to Build Their Sales Culture

How Vorsight Used Ambition to Build Their Sales Culture

An excerpt from our brand-new case study with VorsightBP, who used Ambition to increase business development activity metrics 300% in 6 months.

VorsightBP is one of the most respected names in the sales world. The inside sales training company has provided professional training resources to industry-leading sales organizations for over a decade now.

At around 50 employees, Vorsight as a company is driven largely by its Sales Development Rep team, which includes between 25-30 SDRs at any given time. As a whole, the VorsightBP Business Development team is expected to schedule 450-500 qualified sales meetings for VorsightBP clients each month.

The mission of VorsightBP is to help create better sales organizations in its clients. And in its own sales force, it has seen massive success in terms of ROI and cultural impacts by adopting Ambition as its sales performance management software.

VorsightBP Sales Manager Mary Judge had been looking for software solutions to create a competitive, goal-driven culture on her sales floor for some time before finding Ambition.

“We started with Hoopla and it just became a dud. The team didn’t care, the dashboards were only updated on the hour, so the team learned not to rely on them. We never used it for competitions, individuals never logged in to look at their own numbers. Managers were frustrated by how difficult it was to set things up on the interface – the entire team became apathetic.”

Displeased with the results with Hoopla, Judge set out to find an alternative solution that could create a consistently vibrant, competitive atmosphere on her sales floor and help her business development team remain accountable to their numbers. Judge was looking for a few key value-adds in a Hoopla replacement.

“We wanted accurate data that was clean and up to date, easy setup/integration and most important of all, engagement. We had very low engagement with our SFDC.com dashboards. Our team members weren’t even looking at them, let alone using them to help mark their process.”

Following her disappointing experience with Hoopla, Judge created a set of very high criteria that the replacement product would be expected to meet.

“We wanted to stay current – have publicly viewed and interactive dashboards to lead our team and have on TVs around the office. We needed something that wasn’t going to be more white noise to our BDRs. Something that resonated with them and motivated them. I had given up hope that a platform like that actually existed.”

Upon the recommendation of VorsightBP CRO Steve Richard, Judge and Sales Ops Director Eric White opted to try out Ambition.

Richard had become familiar with Ambition in the preceding months. And as he noted during an AA-ISP webinar from Fall 2015, he saw Ambition as a facilitator of the culture change he wanted to see in Vorsight's sales bullpen.

“We wanted our business development team to shift its focus away from end goals and focus more on how to get there.  Ambition empowers reps by rewarding them for hitting their daily activity metrics. Plus, after a lot of testing, we found millennials perform the best with team contests (a specialty of Ambition) where the winning group members each gets an individual prize.”

Once they began their Ambition trial, both Judge and White were stunned at how easy it was to get Ambition fully operational in VorsightBP's business development team.

Judge recalls the ease with which her team got Ambition up-and-running.

“Ambition was up and running in two hours. Our Salesforce.com integration was fast and easy. The system is intuitive and easy to learn. Once it went live, there was almost no upkeep. It was easy to show to our team, and they were all logged in and already engaged within two days.”

Sales Ops Director Eric White was especially impressed with how intuitive Ambition was to set up and optimize. White describes Ambition's setup as an "Apple-esque" experience where the "usability is almost second nature," a stark contrast from the onboarding experience with comparable enterprise platforms.

"All too often, I install and trial sales apps and tools that sound great on an idealistic level, but the actual functionality either just isn’t there, or, to get there, you have to change your whole organization's process, fight user adoption issues, and that whole nightmare. With Ambition, that isn’t the case."

As White alludes to, the Ambition setup process was infinitely easier than Hoopla’s. To dive deeper into how different the two experiences were, Mary Judge offers some insightful details that contrast the "nightmare" of setting up Hoopla with the "easy and intuitive" setup of Ambition.

“Hoopla took me almost two months to get up and running – including everything from data integrations on the back end and getting the TVs set up was a nightmare. It took forever to determine how to build each slide, and then they didn’t have systems that could support our TV channels. It took almost three weeks past the time the data was ready to actually have TVs on. Ambition, on the other hand, well exceeded my expectations. It was so easy and intuitive!”

Once VorsightBP's onboarding was completed the first week of June 2015, their entire Business Development team (25-30 reps) and all 3 managers were ready to begin using Ambition in earnest. Judge set up several key groups of metrics tracked within Salesforce.com. Four examples:

Each metric factored into a daily "Activity Score" (Example KPIs: "Dials" and "Touches") or a monthly "Objective Score" (Example KPI: "Meetings Scheduled). Judge then set up daily benchmarks for the “Activity Score” metrics and monthly benchmarks for the “Objective Score” metrics and began tracking rep performance on each in real-time.

Not only did the scores give her an overall view of how each rep was doing, they enabled the reps themselves to tie together productivity and performance. The result, according to Judge, was a wholesale improvement in sales culture and a new focus on data-driven performance analytics.

“Our team loves the Activity scores. We use and talk about them all the time. It is a perfect frame of reference, both for our team members and for us as managers. It has completely changed the way we think about metrics. Metrics used to have a really negative connotation here. Managers were seen as “micro-managers” and every time we tried to discuss inputs with our teams, they were unhappy and disengaged. When we were able to show them how individual metrics can contribute to a daily score – that had a direct correlation to performance – everything changed. The team was excited about their inputs again, managers could help them understand where their shortcomings were in a way that made them feel helped (not judged), and we saw a spike in activity almost immediately.”

Judge cites to the daily calls benchmark as a specific example of where her team achieved success.

“We used to ‘fight’ about dials all the time. Managers were always requesting more calls out of their teams, and the teams felt like they were being micro-managed and forced into doing more busy work. The managers were trying to reiterate to the teams that we wanted them to make more dials simply so they could have more conversations with prospects – but it just wasn’t coming across.”

The trick, Judge explains, was using Ambition’s weighted scoring system to place more emphasis on the daily dials metric than emails and other productivity metrics.

“By making conversations the most heavily weighted metric within their daily activity scores we were able to not only increase conversations but dials! The team could finally physically see how their inputs affected their performance.”

“It is refreshing to see a platform that actually works and displays what I want to see,” said Vance, while Christman added that Ambition’s ability to update within minutes is “a big improvement from similar competitors I have experience with.” 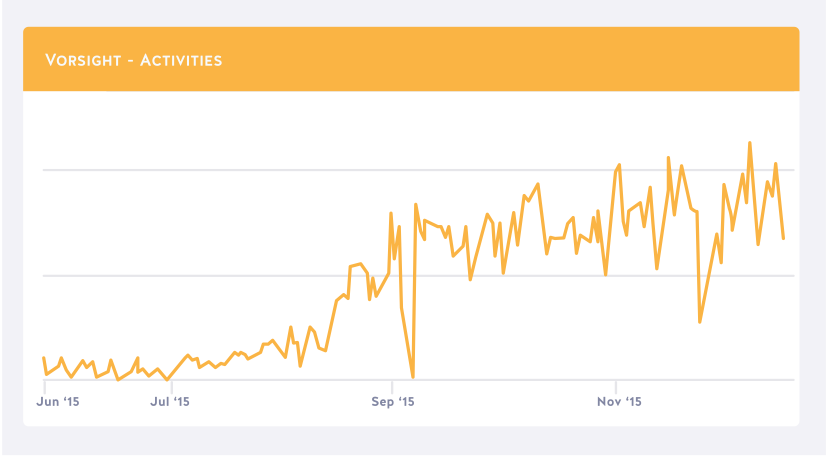 Judge finds additional benefits from Ambition’s ability to quickly and easily assess strengths and problem areas in performance across both her people and her process.

“Dashboarding has never been easier for me as a manager. With the addition of efficiency metrics – things that required downloading CCVs from SFDC are now right in my spreadsheet reports. I have never been more on top of my teams numbers – because I’ve never had a platform that makes it easier to do so.  When it comes to discussing inputs with my team – I have a clear cure was that shows them how their activities and objectives can change, and it makes a huge difference.”

On top of huge boosts in ROI (total monthly conversations with prospects have risen 300% since the team switched over from Hoopla) Judge also recognizes the successful fulfillment of Steve Richard’s mission in searching for a sales performance management platform.

“We rely on two things to stay ahead of the curve as a business: taking a data-driven approach to solving sales effectiveness challenges, and the time and energy of our people. Ambition has helped us in regard to both of those. We are now more aware of what helps our people – and what real inputs for success should be; and, we have a team that actually cares about their metrics. They know exactly where to look, and are actually looking at their scores, and using them as a driver to get themselves where they need to be each day. It’s an inside sales manager’s dream!"

At the end of the day, Sales Ops Director Eric White offers perhaps the best endorsement for Ambition over other competitors.

“If you are looking for a gamification & motivation/engagement tool that actually works like you see in the demo, Ambition is for you.”

Below is a full breakdown of Hoopla features vs. Ambition features. They illustrate why Ambition is the fastest-growing sales performance management platform on the planet as of 2016. 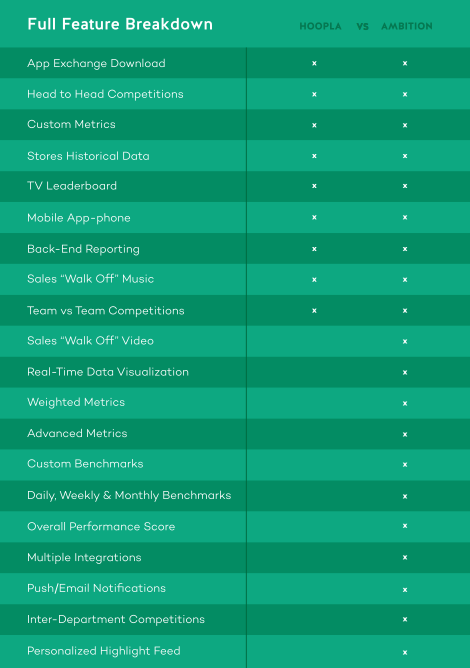 Click here to get your free copy of the VorsightBP case study. 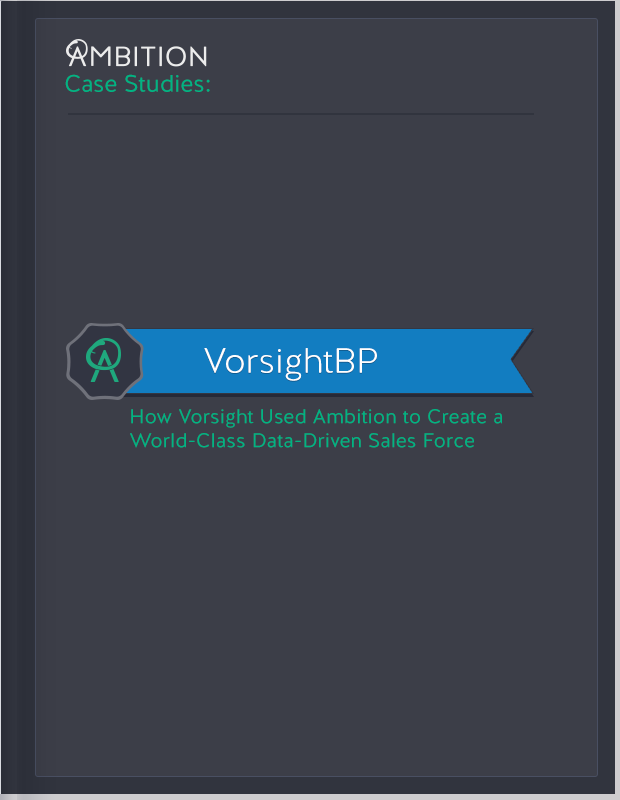