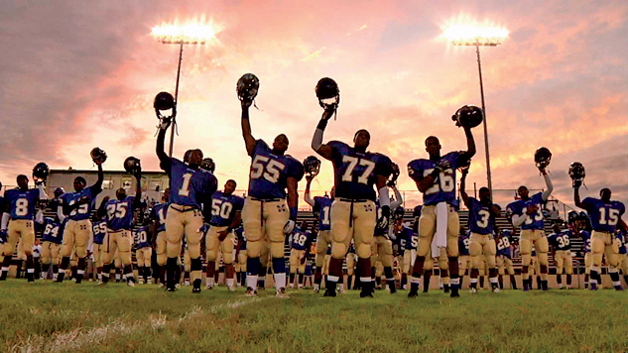 The Sports Documentary Every Sales Leader Should See

The Sports Documentary Every Sales Leader Should See

The 2011 Academy Award winner for Best Documentary has nothing to do with sales. But it may be the most inspiring, instructive film on selling, leadership and teamwork that I've ever seen. And its flown under-the-radar within the sales profession for far too long.

The movie is Undefeated. And in nearly every single scene, the film's main character, Memphis High School football coach Bill Courtney, is selling, leading or doing both at the same time.

If you need more convincing, here's a quick overview about the film and why you should watch it, as a sales leader.

Why Every Sales Leader Should Watch Undefeated

This isn't a movie about football. It's a movie about coaching, overcoming adversity and inspiring others to reach their goals, enrich their lives and discover the character that lies within them.

The movie follows Manassas High School volunteer head football coach Bill Courtney, as he tries to coach an upstart, senior-led football program to its accomplish the unprecedent and win a playoff game for the first time in school history.

Alongside Courtney, the film focuses on three key players in particular, O.C., Chavis and Money, who play leadership roles on the field even as they struggle with very real issues off-the-field.

Without spoiling the film, which I highly recommend queuing up on Netflix or Amazon Prime, immediately, here are the 3 overarching themes of Undefeated and how they apply in the sales leadership context.

According to Bill Courtney, the biggest knock on Memphis high school football - as a city in general - is that its teams are selfish, undisciplined and prone to losing composure once they fall behind.

Throughout the film, we see Courtney relentlessly, intently fixate the idea of "Team First" in his players' minds. In practice, in team meetings and oftentimes mid-game.

In the context of sales leadership, Courtney's consistent, unwavering emphasis on team translates neatly. To achieve the maximum level of individual success, sales reps must operate well not just unilaterally, but within the context of their tream.

Whether it's respecting territories, being diligent in prospect note taking and data updates or even just proactively discussing struggles, successes and hard-won insights with one's peers, today's elite sales organizations are increasingly team-oriented.

In the film, Courtney does a great job of assuring his players, "If the team wins, you win." Moreover, he reiterates that Team is about being a part of something greater than oneself, and that often, it is the team paradigm that enables individuals to reach greater personal heights. That kind of messaging applies precisely within the sales context, to the point of being dogma.

Adversity is pervasive in Undefeated. So pervasive, in fact, that it begins to achieve a near-metaphysical quality. Nothing comes easy in this film.

In over half of its games, Manassas enters halftime on the wrong end of the scoreboard. The players fight with each other, with opposing players and in one case, with their own coaches. Courtney pleads with his players in practice, erupts at them during the games and counsels them off the field.

Adversity is present throughout. And even when the team wins one of its biggest regular season games, the celebration is darkened by the presence of police and the threat of immediate violence. Out of concern for the players' safety, the cops tell Courtney to forego the post-game handshake and direct his team to head immediately to its bus.

Sales leaders will appreciate the omni-present grappling with adversity that Manassas faces, and how Courtney conditions his players to thrive in the face of it. Mental toughness is one of the pillars of Bill Courtney's gospel. It's a tenant he preaches with as much passion and furor as anything else in Undefeated.

And it's not hard to see why. Growing up in the most impoverished neighborhoods of Memphis, his players all-but-guaranteed to face more adversity in their day-to-day lives than the vast majority of the American teenagers their age. It's not about having mental toughness for the sake of football, but for yourself.

For sales leaders, Courtney's transcendent, focused emphasis on mental toughness is a great thing to apply in one's sales team. Teaching reps - especially young reps just entering the field - to be mentally tough in and outside of the office is doing them a service that will extend well beyond helping them meet quota or overcoming a bad quarter. You're providing them with the core components of a successful future as a human being.

The final theme from Undefeated that resonates strongly in the sales context is the fixation on goals. Courtney frequently invokes both personal and team goals: getting accepted into college, rehabilitating an injury, winning a quarter, making the playoffs, winning a playoff game and, most important, seeing the greater picture of life beyond football.

Courtney also equips players with the resources necessary to meet their goals - providing tutoring for O.C., bringing in guest speakers to teach his players about life, and setting up a booster program to fund the team. Lastly, Courtney rewards his players who hit personal goals in powerful ways. For example, he gives out an "Uncommon Man" award to the player who demonstrates the highest character both on and off the field.

For sales leaders, the way Courtney structures team activities and behaviors - each one attached to and reinforcing an overarching goal - is a powerful display of leadership.

It's no surprise that Courtney is a successful entrepreneur who runs his own successful business. The leadership traits he exhibits are the kind that manifest themselves in any sales bullpen as well as any practice field.

All told, Courtney serves as an embodiment for Steve Richard's core principles of sales leadership - consistency and accountability - towards the personal and team goals of his football players. It's a thing of beauty to watch. And it's what makes this documentary a must-watch for sales leaders.