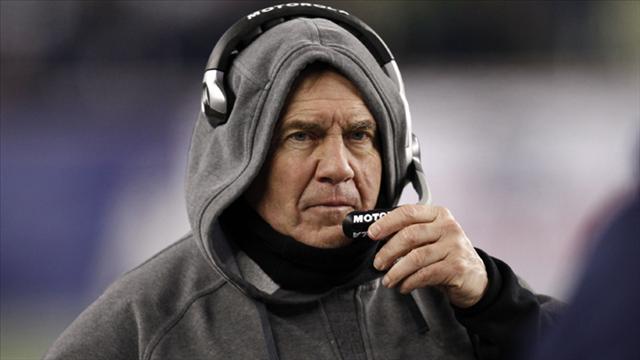 But today, we're entering uncharted territory. In the wake of #Deflategate, it's time for a blog post on how two of the NFL's most prominent coaches, Bill Belichick and Pete Carroll, would operate if they were patrolling a sales bullpen instead of an NFL sideline.

We're about to do a deep dive on the coaching styles of Pete Carroll and Bill Belichick, and apply them in the context of sales org management.  Guess which coach we're loathe to cover? (Hint: It won't be the happy, smiling one).

Let's get right to it. Up first: The man who dresses, carries himself and treats justice with a contempt similar to only one man - Star Wars' Emperor Palpatine - Bill Belichick.

For readers who may have spent the opening half of 2015 isolated in a sensory deprivation chamber, Deflategate was the major news story surrounding the Super Bowl, as evidence began turning up that the Patriots had been deflating the balls they used on offense below regulation, to get a competitive advantage.

Everything culminated with a press conference where Belichick proceeded to deflect blame for his role in the scandal while throwing his 4-time Super Bowl champion quarterback under the bus.

Before you feel bad for Tom Terrific, remember: He was the beneficiary of Belichick's first heinous crime, 2007's Spygate. To what extent? An incredibly well-researched book on the scandal references tons of insider sources, one of whom estimated that Tom Brady knew the defensive play the opposing team was running on 70 percent of his offensive snaps.

Bill Belichick as a Sales Leader

Bill Belichick is like Dick Cheney, only less charismatic. He's the shadowy, strong-willed, syncophant terrorizing those non-compliant to his grand scheme.He's as good at getting away with slick, unethical and under-the-table deals as Shelley "The Machine Levene."

And that's behind the scenes.

Whereas those four famous sales sleazeballs were at least charismatic, likable, and (in some cases) even diplomatic leaders, Bill Belichick's three favorite activities on the field of battle include scowling, galavanting after officials, and if possible, both at the same time.

Picture an un-charismatic Gordon Gekko who throws Bud Fox under the boss. Or a scenario where it was Jonah Hill, and not Leo Dicaprio, running the show in Wolf of Wall Street and snitching on DiCaprio as his boss, rather than his underling. 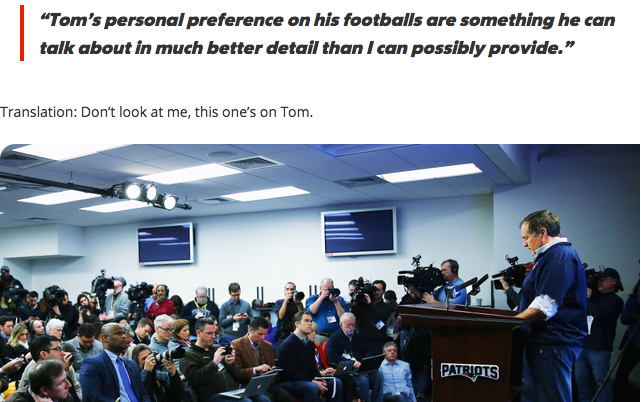 Belichick is the classic paranoid, politics-obsessed top sales executive. He's reached the apex, now he believes the only way to maintain that position is to pick up a tire iron and smash his moral compass into a thousand pieces. While using the other to douse gasoline all over the rule book before setting it afire and watching it burn into nothing but charred ashes.

A Belichick sales administration would primarily consist of him spying on competitors (external and internal), taking ethical shortcuts, hiding behind his top lieutenants and, if necessary, throwing one of those top lieutenants under the bus to save his skin.

He'd spend the entire sales technology budget on competitor intelligence platforms. A suspiciously high number of his top underlings would move on to top sales executive roles at other companies, only to almost all mysteriously fail miserably.

And yet... He commands the respect of his personnel. He makes sharp choices in terms of bringing on new talent, whether it's savvy draft picks on hidden future greatness (Brady) and utter forces of nature (Rob Gronkowski) or shrewd acquisitions of big-name veteran talent (Randy Moss).

The Patriots have always had an identity under Belichick. With the exception of the infamous (and no doubt karmic) 17-1 season in 2007, they've operated with steely clutchness in big moments. Contrast that with, say, every Andy Reid-coached team since the new millennium.

Because of his status as the only NFL head coach to be caught dead-to-rights cheating in the past decade - and twice at that - we'll never know how much of Belichick's success can be attributed solely to his coaching and management acumen. He's the NFL version of Jordan Belfort -- excerpt with the personality and demeanor of Walter Matthau circa Bad News Bears.

Now that we've just completed the darkest swath of content in Ambition history, let's step into the light. And that light is Pete Carroll. Pete Carroll is the coach Rex Ryan wished he could have been. Exuberant, player-friendly, and able to coach a brash, young team with a shaky, even younger quarterback to Super Bowl victory.

Before Pete Carroll, I and the rest of the world outside of the Pacific Northwest, shared the same feeling about the Seattle Seahawks. Totally agnostic. But then came the 2010 Wild Card game - the 7-9 Seahawks at home versus the defending champion, heavily-favored Saints. The top media narrative heading into the game -- the Seahawks as an indictment of NFL playoff seeding.

Flash forward 5 years, and you can find Pete Carroll coaching the Seahawks to back-to-back Super Bowls, sprinting NFL sidelines like an 11 year old fan, and, most telling of all, earning the player's vote as the coach they would most like to play for.

Pete Carroll as a Sales Manager

Carroll is the ultimate depiction of the enthusiastic, perpetually upbeat top executive. Spend 5 minutes watching Pete Carroll mid-game, and you'll see a guy with a big personality who also excels at tempering boisterousness before it become bloviating.

A true testament to Carroll's coaching abilities is the colorful cast of characters that make up his Seahawks team.

All-Pro Defensive Back Richard Sherman celebrated their first NFC Championship by giving the most intense post-game interview in NFL history and briefly (wrongly) getting villfied by a genuinely rattled middle America.

Fellow All-Pro and franchise foundation Marshawn Lynch has been prone to going into Beast Mode, inhaling packs of Skittles after touchdowns, mocking reporters in hilarious fashion and making it clear where stands on action (about it).

Star receiver Percy Harvin went into a bizarre, mid-season melodramatic spiral that even Shia LeBouf would have found tough to watch. He was traded to the New York Jets after week 8.

I could go on, but you can see this was a complicated band of performers under Carroll's watch. And in a matter of years, they became Super Bowl champions.

Pundits and journalists love to rave about Carroll's philosophy-driven coaching style, which would fit right in at executive retreats throughout corporate America.

Three rules: 1. Always protect the team; 2. No whining, no complaining, no excuses; 3. Be early.

Beliefs: It’s all about the ball. … Everything counts. … Respect everyone.

Philosophy: Do things better than they have ever been done before.

In sales organizations helmed by Seahawks fans, there's a very good probability that an exact replica of the above -- with "customer" replacing "ball," is plastered somewhere in the office.

Carroll is a coach who respect talent and gives elite performers the freedom and flexibility to dictate the tactics and processes they perceive will help the the team reach its desired outcome.

Which is why scary Richard Sherman can get on camera and break down hyper-complex reads, matchups and developing offensive sets on command.

Then, he goes out and plays like a feral, ball hawking jungle cat. That's the sign of great coaching, be it sports, sales or any other profession - creating a system where your elite team members become eager students of their profession, then use their raw talent and intellectual advantages to execute at the highest level when it's gametime.

A Gridiron Approach to Sales Coaching

Before we go, it's imperative to condition that, in both sports and sales management, likability is not necessarily a prerequisite to success.  Being a mean-spirited curmudgeon doesn't make you a bad coach (just ask Bill Parcells). Nor does being a beacon of positivity guarantee that you'll be a good coach (just ask Wade Phillips).

With that said, respect for personnel seems to be the common thread that runs through the DNA of great coaches. Contrast Carroll's Seahawks with, say, what happened in Tampa Bay under Greg Schiano, who couldn't have respected his players less.

Ultimately, both Belichick and Carroll, in their own ways, excelled the most as coaches in empowering their personnel to succeed. That, more than anything, sets the precedent for sales managers to follow -- if not in tactics (see: Belichick), then in principle.

Which leads us into a fitting final point for this post. From a managerial standpoint, the cardinal sin that Bill Belichick made at New England was not spying on opposing defenses or deflating balls. It was throwing his top, loyal performer under the bus when he could have been the one to step in front. Advantage: Carroll.

Thanks for reading. Feel free to submit your comments below and check out Harvard Business Review's article on The Sales Director Who Turned Work into a Fantasy Sport.