We ran a March Madness-style tournament to decide the top SaaS company of 2015. Here are the final results. After, 20,000+ votes, 63 fallen competitors, 15 days, and 6 rounds, we have a champion.

The tournament to decide the top SaaS company of 2015 began March 19, 2014 with 64 companies.  For those of you unfamiliar with March SaaSness, these three links will give you everything you need to know.

First, our Selection Sunday Tournament Announcement. Next, our breakdown of how the Tournament works. Finally, our profile of the entire March SaaSness Field. The short version: March SaaSness wa a vote-based, March Madness-style tournament to decide the top SaaS company of 2015.

The participants: 64 SaaS industry leaders, seeded according to number of Twitter followers. The format: A massive, March Madness-style bracket. The scoring methodology: Popular vote, taken from 9am to 9pm EST the day of each match.

And now, we have our winner. 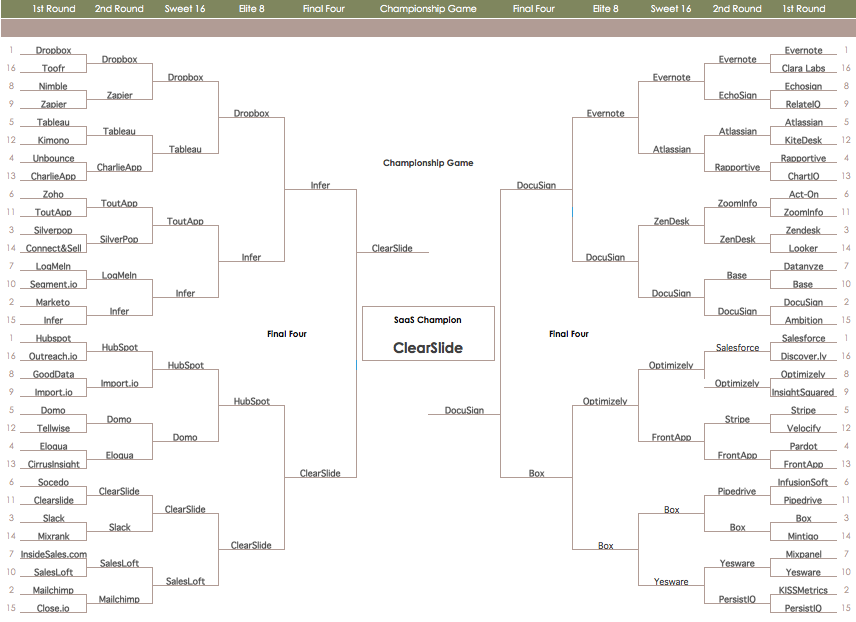 Clearslide aren't just the newfound possessors of a $50 Million Series C Round. They're a leading-edge tool that provides valuable insight on customer and prospect interaction, bringing advanced data analytics to the actual communication exchange between sellers and prospective buyer. Based in Silicon Valley, ClearSlide is backed by Greylock Ventures and a team of other household name VC's. Let's take a look at how they won the 2015 championship!

How They Won: Clearslide had to survive two of the most memorable matches in this year's tournament in order to make the Final Four. After a convincing Round 1 win over 6-seed Socedo, they ran into tourney favorite Slack in Round 2. A massive run late in the matchup sealed one of the tournament's biggest upsets. Slipper: Meet foot. Incredibly, ClearSlide's toughest test was yet to come -- that would be their Sweet 16 bout with SalesLoft.

The instant classic saw our highest voting turnout of any single March SaaSness matchup, as the two companies traded blows in a way that echoed March Madness classics like the 2010 Xavier vs Kansas State match. After the dust settled, it was ClearSlide advancing to meet 1-seed HubSpot in the Elite 8. They would claim the lead early and never look back, beating the odds to become their region's representative in the Final Four.

In the Final Four, ClearSlide went toe-to-toe with the surprise company of the tournament, Infer, breaking things open with a 2nd half voting blitz that solidified their spot in the Finals. They sprinted out to a huge early lead in their Championship Game matchup versus DocuSign and thwarted a late rally by the e-signature giant to become our first-ever March SaaSness champions.

Looking back, Butler's 2nd consecutive Final Four run remains one of the most impressive in March Madness history, for unique reasons. There are uncanny resemblences here. The duality of 2011 Butler is memorable. They were a mid-major that -- just one year earlier -- had come inches away from winning the National Title. They had lost that season's star player and were seeded relatively low (8-seed), and yet they still seemed as dangerous as any team in the tournament. They weren't a juggernaut, but they were a program clearly on the rise. And their fans needed to see a cardiologist during the final minutes of each of their four wins en route to the Final Four.

In the SaaS industry, ClearSlide commands respect, but few could have foreseen them knocking out household names like Slack, HubSpot and DocuSign. They may not have had the consistent spree of drama that Butler did, but they did have the most action-packed, heart-pumping tournament victory thus far in their memorable bout with SalesLoft. No one was sleeping on ClearSlide, but they proved themselves to be more formidable than some of the biggest SaaS industry names in our tournament. They are a worthy champion -- congrats ClearSlide!

Natalie was the driving force behind ClearSlide's title run. Not only did she rally her team around each matchup -- drumming up unmatched social media outreach from her ClearSlide colleagues -- she unleashed some of the most spectacular tweets of the tournament. Let's go to the highlight reel: 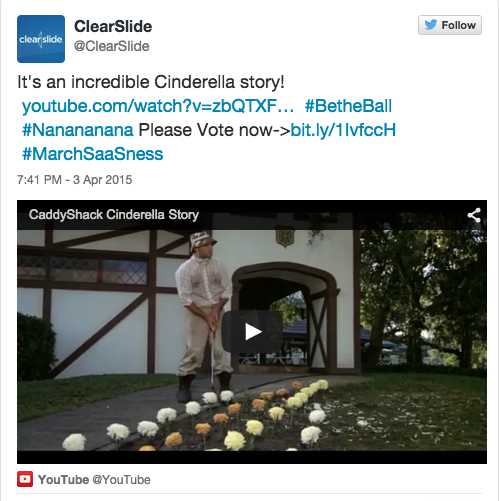 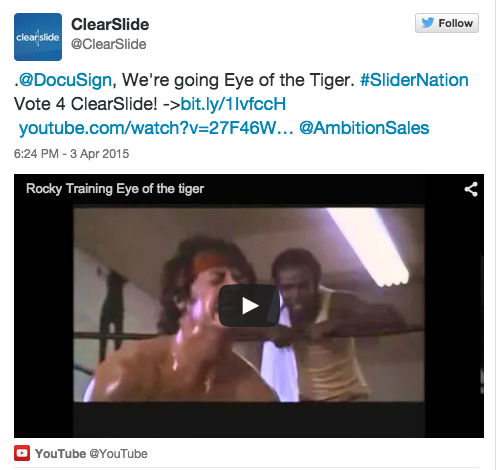 It's been an amazing three weeks since we first announced our tournament to declare the top SaaS company of 2015. The positive response to March SaaSness, from the competitors and the general public alike, has been simply overwhelming. Our thanks go out to Docurated for covering the tournament.

Congrats again to ClearSlide, they'll be your defending champions for the 2016 tournament. To everyone who participated in some way with March SaaSness, thank you so much -- you guys are the reason this has been so much fun.

Ambition is endorsed by Harvard Business Review, AA-ISP (the Global Inside Sales Organization), and USA Today as a proven solution for sales teams looking to run hyper-engaging sales competitions that accelerate revenue. Contact us and build your March Madness themed sales contest.