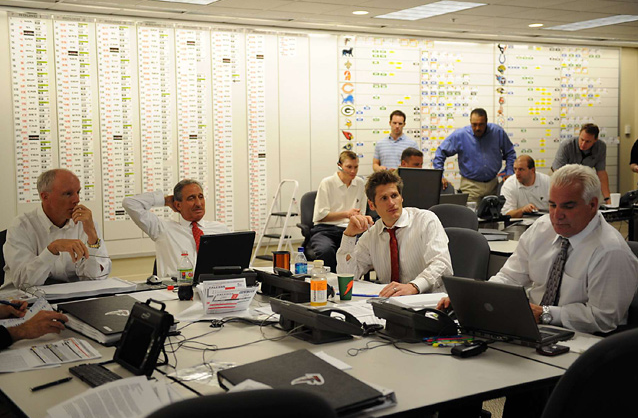 Sales Managers: Don't try to hide it. We both know you're about to spend the remainder of 2014 devoting more time to studying up on fantasy football than managing your people.

Though we can't stop you from making that ill-advised 3rd round selection of Shonn Greene or incorporating Richie Incognito into an awful team name, we can tell you that the 9 hours you'll spend each week managing your Fantasy Squad instead of your workforce don't have to be a total waste of time.

Want to get the most out of both teams. Start applying several major principles behind Fantasy squad management to how you run your sales force.

Here are 5 valuable mantras that apply to both Sales and Fantasy team management. Use them with discretion and thank me later.

#1. Embrace change and be responsive to timing.

I don't care if you have Peyton Manning and the NFL's number one passing attack in your arsenal -- there are going to be tough matchups where they struggle to perform. Example: Week 8 is a particularly bad matchup for your go-to Flex player (a WR going up against the #1 Passing Defense). Meanwhile, a benched WR is playing the Philadelphia Eagles (Man, we're a long way from the days of Darrelle Revis and Nnamdi Asamough manning that secondary, aren't we?).

Unless you are managing the Double Entandres, you're probably a savvy enough fantasy player to make the right call there and sub in the WR who is about to torch the Eagles' hapless Defensive Backs. Likewise in sales, if it's a critical time of the year for your company to close deals (for example: a colleague of mine in payroll technology closes the majority of his deals in Q4), you should refocus efforts and allocate resources there during that period.

Most successful Fantasy teams are rotating at least one member of the lineup week-in and week-out. Likewise, you should not be afraid of adding subtle wrinkles to how you ordinarily manage your sales force. Look for innovative new ways to shake things up by reading Pat Mayo  for your fantasy squad or listening to Scott Britton for your salesforce.

The human element comes into play big-time with your fantasy and sales teams. These aren't cyborgs. They're imperfect, physically and emotionally vulnerable, and prone to go through upswings and downswings in performance, oftentimes as much due to circumstances around them as to something under their immediate control.

The question is: How best to handle emerging trends in employee and market performance? For example, it's Week 5, and your friend is offering to trade you last year's RB stud, except that he's off to a sluggish start due to an injured Offensive-line and offseason talent exodus. What do you do?

It's not your fault your friend failed to recognize that his underperforming RB's opponents were already going to be stacking against the run this season, or that he played on a team coached by Greg Schiano.

In sales, it's similarly unwise to go after an expensive, big-name sales guru who specializes in field sales when your company is just starting to build its SaaS sales team. Alternatively, you may be facing market changes indicating a once-stellar territory to be much less viable this year.

Failing to adjust your plan of attack in such scenarios is like picking up that trendy RB who becomes caught in a power struggle between his mediocre Quarterback and clueless, power-tripping Head Coach. Don't become hypnotized by past returns: find a more on-point sales vet, look for a new market and refocus your team's plan of attack.

#3. Value Talent Retainment as much as Acquisition.

It happens every year. Elite players get injured, iced out of play-calling, or lose touches to a surging new talent. And in your salesforce, personnel leave for better offers, better cultures, or reasons related to health or family.

In both sales and fantasy, your focus needs to be as much about keeping your talent as it is about finding the best talent out there. This is of course easier said than done in fantasy, where you have limited influence on talent retainment. However, you do have a modicum of control in that you can focus on acquiring players who lack an injury-plagued background (for example: a walking concussion-waiting-to-happen).

Fortunately, this is not the case in sales. You have a large measure of control over whether your talent stays or goes, and you should wield that power with savvy. Company's pockets relatively shallow? Offer alternative forms of compensation, like opportunities for growth, engaging culture, and consistent recognition. Being a good boss, in general, will also help you retain talent and avoid lost revenue from training new sales reps.

Beyond retainment, you should always be on the prowl for new talent to help improve the quality of your depth chart and enable growth.  Check the waiver wire (set your alarm for 4 a.m. so you can be first, like some of my friends), where you can get the best value at the lowest cost, have a presence at industry networking events, and cultivate an all-around positive company reputation.

There are many different types of sales professionals, and just as many ways to format a Fantasy League.

What are the rules of your league? Do you use Points Per Reception or 100+ Yard Bonuses? 2 Quarterbacks or WR/RB flex? There are infinite variables, and these should all factor in to who and when you draft certain players.

Should you make your first pick at WR a possession receiver or a big game threat? Should you place more priority on finding talent at QB or WR/RB? All questions predicated upon League rules.

In the same way, you should choose and cultivate talent based on industry type, market trends, and so forth. Is your industry focused more on inside sales or outside sales? Is that starting to change? Would you rather have someone who excels at communicating via email and social media, someone with a compelling in-person presence, or Terrell Owens? (Good luck selling your products in Philadelphia, T.O.).

In both sales and fantasy sports, there are many different approaches, none perfect, and a multitude of philosophies about which works best. Pick one and roll with it.

You'll have weeks where your team does everything right, puts up 140 points, and loses by 1 because the Seahawks defense suddenly turned into the Greatest Show on turf (I hate these teams).

On the other hand, you'll have weeks where you bench Big Ben the one week he puts up ridiculous numbers against Detroit, your team flubs its way through an all-around weak performance, and you still win 80-78.

In sales, you're going to have periods where your team is going hard as they can, seeing little results. And then all of a sudden, things start falling into place just as you've just started to give up hope.

The point is: You don't fire high-performing sales people after one bad quarter, just as you don't bench a high-performing RB who has one critical sub-par week. Maintain your composure and look at big picture performance.

So remember sales managers: Apply that rigorous level of critical thinking regarding your fantasy team to managing your workforce, if your brain can handle it. At the very least, the next time you get caught checking the waiver-wire mid-meeting, you'll have an excuse.

Ambition is endorsed by Harvard Business Review, AA-ISP (the Global Inside Sales Organization), and USA Today as a proven solution for managing sales teams. Hear from our customers below.