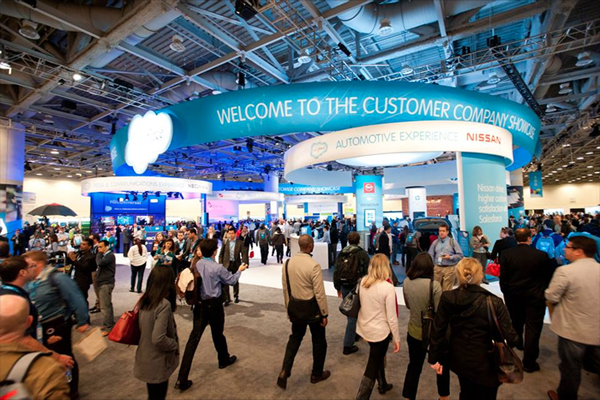 5 Dreamforce Sales and Marketing Strategies That Worked for Us

5 Dreamforce Sales and Marketing Strategies That Worked for Us

Our 1st year at Dreamforce went over like a lead balloon. For #DF15, we were determined to do better.  Say the word "Dreamforce" around any SaaS marketing executive between August and mid-September and their blood pressure will instantly spike 20 points.

The annual enterprise tech conference arrives each fall like a tornado, sucking up all the time, money and energy sales and marketing teams for DF vendors can surrender.

The promise: Potentially massive ROI. Rapidly enhanced industry exposure. And if you're SalesLoft, the burning envy of all your peers at your marketing ingenuity. The reality is, our 2014 debut at #DF14 was a failure. We ponied up tens of thousands of dollars for a booth, flew our entire executive and sales teams out to San Francisco, and braced ourselves for the massive onslaught of incoming revenue.

The returns: A net loss. And it wasn't even close.

Reflecting back as we prepped for #DF15, our errors started to crystallize. Our booth's messaging was off. Our reliance on lead swapping was naive. Thousands of our cold emails were swallowed up by inboxes swamped with post-DF pitches.

Our entire approach was misguided. So for future Dreamforce rookie vendors, here's a list of 5 things we consciously did differently for #DF15 - all of which paid off.

This strategy had three parts.

Part One. The Booth

Following in the footsteps of ToutApp and other savvy vendors from years prior, we elected to make the major focus of our booth an interactive white board, where we asked visitors to list the biggest pains in their sales and marketing technology stacks. 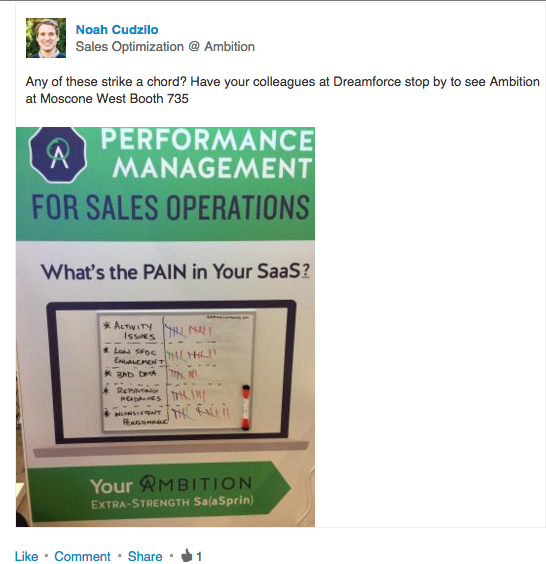 The premise performed triple-duty for us. One: It served as a conversation starter and opportunity for visitors to vent at what's otherwise a 4-day lovefest about all things Salesforce and sales technology. Two: It jumpstarted the qualification process with visitors who seemed like potential prospects. We focused the "pains" around issues our platform specifically addresses, alluding to Ambition as the tonic for the frustrations in the space below the white board. Three: It made an otherwise arduous, Q&A-driven qualification process, which prospects are loathe to continue for too long at a place like Dreamforce, a fun, interactive and communal experience.

The sales operations manager who added the 12th tally to "Low SFDC Engagement" at the very least left the booth heartened that 11 other managers were lying awake at night worrying about the same thing. As with everything in sales and marketing - it's not what you say to people, it's how you make them feel, that leaves the lasting impression.

Concurrent with the start of DF15, we launched a brand new website and social media campaign entitled, Save the Millennials. Bringing on 20 other enterprise software providers and consulting firms for the initial launch, we sought to raise awareness over social media by asking other companies to pledge their commitment to "saving the Millennial workforce via technology" by signing up on our site. 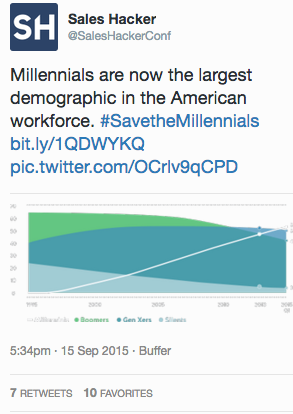 The companies who joined the cause following its launch got their company logo and link featured on the Save The Millennials website. On Wednesday of the conference, we had an open letter to Marc Benioff requesting that Salesforce join STM published in Information Age.

An important thing to remember at Dreamforce: the ability to interact one-one-one with your existing clients is equally as important as meeting new prospects. Having a happy client endorsing you publicly during the Black Friday of SaaS purchasing? We'll take it. Thank you to Steve and the AppointmentPlus team for being great clients and giving us some additional hype at the conference.

A picture is worth a thousand words. And these two screenshotted tweets illuminate the Grand Canyon-esque chasm between our passive DF14 approach and our aggressive DF15 approach to interacting with booth passerbys.

The Ambition Booth at DF14 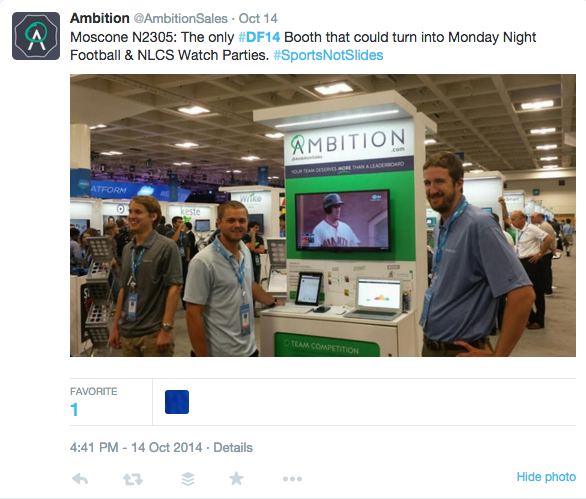 The Ambition Booth at DF15 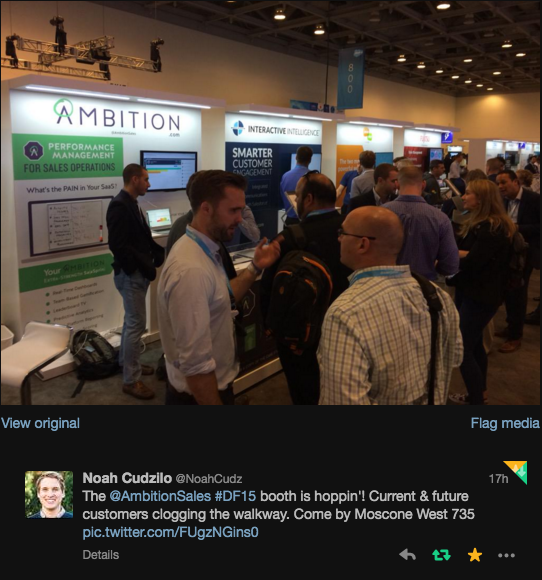 There's a reason Dreamforce stalwarts like InsideSales and Domo get walls of people surrounding their booths. They're flamboyant, aggressive and engaging. This year, we were much more proactive, outgoing and aggressive. It pays to make eye contact and reach out to people who show even just a remote bit of interest as they walk by your booth. Don't shrink from the opportunity.

Strategy #3. Be Efficient with Time

This year, we made an effort to qualify booth visitors ASAP. At the risk of being brusque, we quickly turned a potentially meandering conversation into a quick vetting of potential fit. 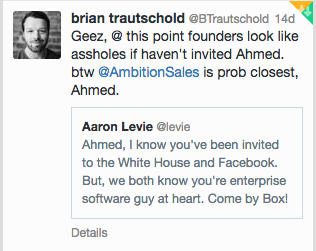 There's a balance to be struck, in such conversations, of course. But Rehan managed to be amiable while also getting to the point as soon as he could.  We didn't want to waste our visitors' time, nor did we want to waste ours. Cutting an unqualified conversation short means opening the opportunity to meet another qualified prospect we otherwise wouldn't have engaged.

Ultimately, it boils down to the consultative approach to selling - and extending it to a conference scenario. You're there to problem solve, first and foremost, not preach to the choir or win the admiration of someone you can't ultimately help.

SalesLoft did an excellent debriefing of their (much more successful) strategy to schedule meetings with prospects at the conference. While we didn't match their numbers, we did find the strategy beneficial. 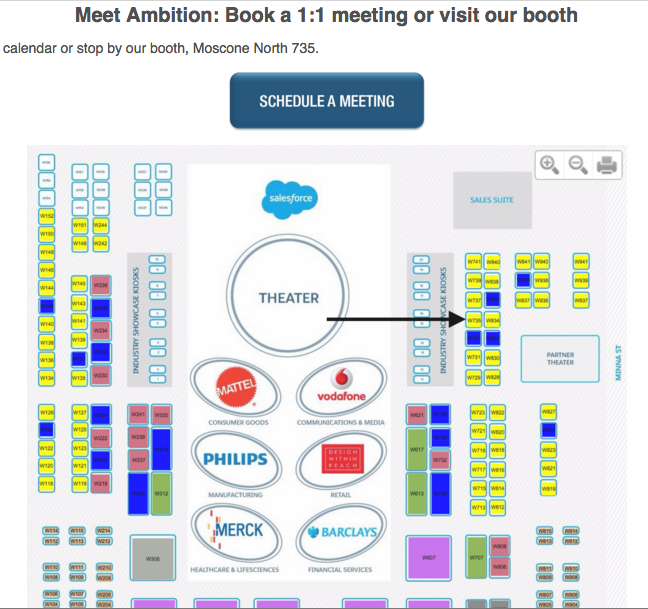 Using Calendly, we sent out a series of marketing emails to Dreamforce attendees, requesting that they sign up for a 15 minute in-person meeting at our booth. With relatively minimal effort and forethought behind this strategy (a last-minute add-on the week before the conference), we got dozens of meetings set before the conference even started.

This year, we divvied up presentations and breakout sessions for each sales team member to attend. 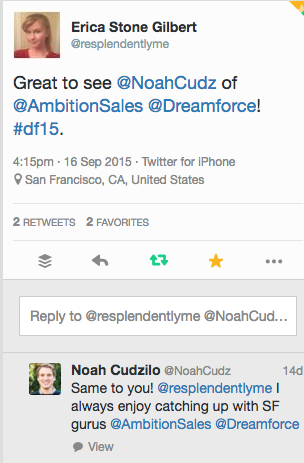 It's also much easier to build ongoing business relationships away from the booth, where the hustle and bustle of meeting prospects trumps all.

The biggest benefit of these sessions: an opportunity to get easy, one-on-one conversations with targeted prospects who had likely odds of qualification.

Just three weeks removed from the conference, we've already closed several deals that originated from #DF15 and achieved a net positive ROI on our investment. The key with committing to a conference like Dreamforce, with any sales and marketing team, is to go big or go home.

The 5 tactics we employed at #DF15 were hardly cutting-edge new initiatives, each had been deployed successfully by another Dreamforce vendor in previous years. All we did was make them our own and put the budgeting and manpower resources behind them to make them a success.

If you need help driving your end-of-year revenue initiatives, visit our AppExchange page and see how Ambition can broadcast your real-time sales metrics directly to your managers, reps, and business analysts.